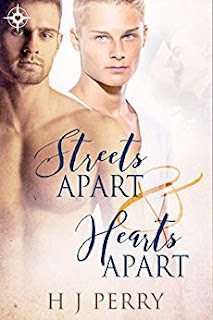 A gay friends to lovers romance. I’m Aaron. I’ve got a crush the size of Europe on Joe, who lives across the street, and when he’s around, I transform into a prize idiot. The rest of the time I’m a trainee plumber. On Sundays, I play in the amateur football league. In all, a confident, well-adjusted guy. For a 20-year-old virgin who lives with his parents and falls apart over the boy not-quite next door.Joe’s cute, sexy, fun and the reason the word sexy was invented. We used to play together as kids in the massive posh house that he lives in with his parents, the doctors. Now he’s at university, studying literature. How do I ask a guy for a date when I can’t string together a coherent sentence when he’s around, and I don’t even know if he’s gay? And what’s more, no one knows I’m gay.Who keeps their boyfriend in the closet these days?I want the world to know how much he means to me.I’m going to come out, but not today, I can do it next week.This is a hot, sexy, feel-good romance about two young men who fall in love for the first time. They are crazy about each other and do lots of kissing, hand holding, and taking their clothes off.***A feel-good coming out story.***64,000 words of standalone sexy, comedy, romance.Two novellas previously published separately in 2016, now combined into one full length novel.

Streets Apart, Hearts Apart, a bundle of two previously books, is a classic friends to lovers romance. As I am addicted to this genre, I love this book by HJ Perry.

Joe and Aaron grew up across the street from one another, but their upbringings were vastly different. Joe has grown up surrounded by a family who loves him and accepts the fact that he is gay.  Aaron, meanwhile, works in the macho world of construction, plays the macho game of football, and his doctor parents aren't around most of the time. As a result, Aaron is firmly hiding in the closet.

When Joe and Aaron start their romance, they are both young adults. While they were close friends growing up, but they drifted when teenage hormones brought new feelings into the mix.

This story has romance, humor, and a happy ending. It is well written with a little angst thrown in, some hot scenes, and two lovers trying to navigate their way while one is in the closet. Decisions need to be made, including coming out or not, and if a plumber's apprentice is a worthy man for the son of two doctors.  Should one risk it all for love or not?

For me, Streets Apart, Hearts Apart is a must read!