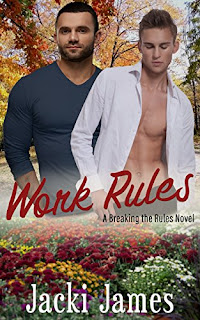 If Nathan Davenport learned anything from his past, it’s that dating requires two rules to protect himself: never date anyone he works with, and never allow anyone to set him up on a date. He hasn’t had any problems keeping his rules since he doesn’t really date at all. Instead, Nathan is the kind of guy men just want to play with for a night. He doesn't think he's the kind of guy anyone wants to keep forever. And he's been right, until Alex.Alex Doyle knows one thing. Even though he’s never been in a relationship with a man before, he wants Nathan…and not just for a night. He thought getting Nathan to break his rule about not dating co-workers would be his biggest problem. But convincing the beautiful man he's worthy of a forever-relationship proves to be the greatest challenge of all. But Alex is willing to try because he won’t settle for anything less than everything with Nathan. Just when Nathan starts to believe someone wants him for more than a good time, his past comes back to haunt him. Can he and Alex find a way to make things work? Or will breaking his rules cost Nathan everything… again.

Work Rules is a fantastic follow-up to Family Rules. It is set in the same world as Family Rules, and includes all the wonderful characters that I feel in love with previously.

In this book, everything is centered around Nathan and Alex.

I love Nathan. He is so damn refreshing and just so damn lovable. He just needs to look past his rule of not dating co-workers. Especially Alex, who really wants to date Nathan.

I adore the way Alex can read Nathan. I love how easily he can see that Nathan puts on an act when he is out at a bar. Alex is frustrated because he knows that Nathan is so much better than the way he is acting. Problem is, does Nathan know he's better than that?

I also find myself loving the way Nathan starts to think differently about himself because of Alex. It is beautiful to see someone want to be more real with someone special. Unfortunately, Nathan doesn't think he deserves someone special like Alex.

One huge theme is this story is the effects that abuse can have on someone. Nathan's ex did some horrific things to him. And Nathan's self-esteem took a big hit as a result.

The road for Nathan and Alex will not be easy. They have to face some obstacles along the way. But the end result will be worth it.

Work Rules is a fantastic book. It proves that Jacki James did not have a fluke with Family Rules.  I am thrilled with both books and can only look forward to what else Jacki writes!