A World In Blue by Danni Maxwell 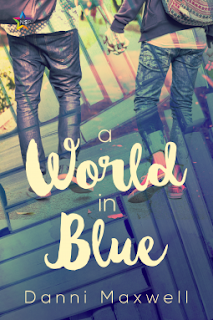 
At just eighteen years old, Oliver was offered a publishing deal. The very same day, he lost his mother to suicide. Two years later, he encounters a tall, dark, and handsome stranger. Never thinking he would write again, he is inspired once more.
Just as Oliver is launched into fame from the success of his book, the handsome stranger comes back into his life. His name is Blue and he happens to be flirting with Oliver.

A World in Blue is the work of debut author, Danni Maxwell.

Oliver is just 18 when he is offered a book contract on the same day that his mother commits suicide. He is ready to give up on life now that his mother is gone. He certainly never expects to be inspired to write again, or to fall in love.

A World in Blue is extremely fast-paced and jumps forward often. Don't blink or you will miss something.  Although it is short and quick, at the bottom of it is a sweet romance by Danni Maxwell. It is worth a read if you are looking for something short and kind of sappy sweet.