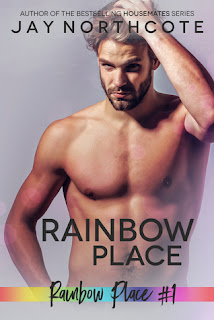 Can Jason find the courage he needs to be the man Seb deserves?


When Seb Radcliffe relocates to a seaside town in Cornwall, he feels like a fish out of water. He misses queer spaces and the sense of community he enjoyed when he was living in the city, and decides to open an LGBT-friendly cafe–bar.


Jason Dunn is the builder Seb hires to help renovate the rundown space where the cafe will be housed. Jason is also gay, but unlike Seb, he’s deep in the closet. He’s never had a relationship with another man—only allowing himself the occasional hook up with guys who are prepared to be discreet.


The attraction between the two men is instant and impossible to ignore. But while Seb is out and proud, Jason is terrified of being exposed. With the grand opening of Rainbow Place approaching, tension is growing among some locals who object to Seb’s plans. When things escalate, Jason is forced to choose whether to hide in the shadows and let Seb down, or to openly support the man he’s fallen so hard for.

Every time I see a new book by Jay Northcote, I am thrilled and anxious to get my hands on it. The same happened when I saw Rainbow Place. Of course, the hot cover doesn't hurt, but I typically love any book by Jay. Rainbow Place is Book 1 in a new series titled, Rainbow Place.

In the beginning of the book, Seb moves out of the big city and into a small seaside town. Seb likes this new town but definitely feels like he's missing the diversity of the city. The only LGBT people he knows are his neighbors, who are a lesbian couple with a teenager. This couple convinces him, and ultimately helps him, to open a LGBT-friendly café/bar. He hesitates to do so, but agrees that they town really does need something like this type of café.

Right away, I find myself falling for Seb. He is a good, kind, and honest guy.

Seb ends up hiring Jason to help out with the renovation. Jason is super nice guy, good looking, but deep in the closet. And he is happy and content to be there. The only person that knows he's gay is his ex-wife. And, yes, she is an ex-wife now because he is gay. Jason has only ever had hook-ups with men, never a relationship. And to have those hook-ups, he makes sure to be very discreet. But, this new guy, Seb, is a huge temptation to Jason, one that he is finding impossible to ignore.

Once the town finds out about the type of café Seb is opening, things get ugly. The homophobes make their thoughts heard, and Jason is hiding now more than ever. Unfortunately, Seb refuses to be with Jason unless he can be out. And, at this point, Jason is attached. He can't bring himself to come out though.

I love this story. As usual, Jay Northcote writes the characters to be very romantic and intimate. The plot and the pace are both wonderfully written. It is a warm, touching and emotional story. It also has some fantastic steamy scenes.

One of my favorite parts of the story is a letter that Seb writes to the homophobic community.  He explains that equality isn't just about making sure the laws are equal. It is also about acceptance and the ability to walk with your partner, holding hands, without any fear. Seb explains that equality is basically the ability to live open, without feeling as though one is wrong to be gay. I find this part to be extremely on point and poignant.

Overall, I adore and love Rainbow Place. It is absolutely worth a read. This is another winner by Jay Northcote!