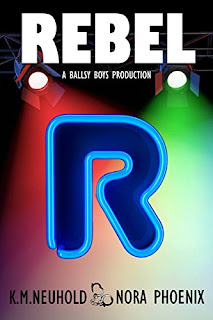 "I don't do relationships, I break them." ~ Troy
If there’s one thing life has taught me it’s that everyone eventually leaves. But that's okay because I have a strategy: no friends, no boyfriends, limit repeat hook-ups, no sleep overs, and above all leave them before they leave me. I’ve put my break-up skills to work doing others’ dirty work for them.
The last thing I expected when I agreed to do an embarrassing breakup song and dance was to end up on the doorstep of the very recognizable—and stupidly sexy—Rebel. When you meet a man like Rebel you'd be insane not to make a move. And just because he has me tossing out every single one of my rules doesn't mean I'm in trouble, right?
“I’m everyone’s friend, but no one’s everything.” ~ Rebel
I love working for Ballsy Boys, but when you make the kind of videos I do relationships are pretty damn impossible. Besides, guys find me sexy and want to either be with me or be me, but no one has ever cared enough to see the real me.
Until I meet Troy. He has no problem whatsoever with my job, but he’s determined to keep me at a distance. For the first time, a hook-up alone is not enough. I want more with him. Hell, I want everything. But he resists at every step until I’m about ready to give up. What do I need to do to show him that this is real and worth fighting for?
***Rebel is the first book in the Ballsy Boys Series and is a super sexy MM romance with plenty of good times. While this book and this series do contain some instances of sex outside of the main relationships, they DO NOT contain cheating.

Troy is a college student who creates a unique job for himself. He gets paid to break up with people on people's behalf.

Rebel meets Troy when Troy is hired to break up with Rebel. Troy recognizes him and makes him a proposition he can't refuse.

As time goes on, the two start having a benefits only relationship which then starts to turn into a real relationship before either realizes.

Rebel is intriguing, captivating, enchanting and steamy! I am exited to see what else KM Neuhold and Nora Phoenix come up with for this series. Be sure to check it out!