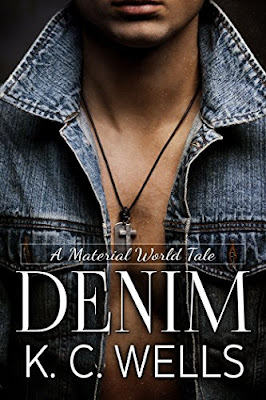 
Harry has no illusions about himself. He looks in the mirror and sees a fat, ugly bloke who’s gone stale at the age of thirty-five. He wasn’t always like this–in his early twenties, he was into clubbing, dating, just like any other gay guy in London–but since he moved in to look after his mum, and her subsequent death, he’s let himself go. Besides, there’s no one to make an effort for, so why bother, right? Then a construction site worker starts whistling at him every morning on his way to the office…Tony thinks Harry is one of the sexiest bears he’s ever seen. But when he finally gets to talk to Harry, Tony soon realizes that getting to know him is going to take some effort. Not that the prospect puts him off‒Tony loves a challenge, and he’s not about to give up on Harry. Two ordinary men. Real life. Real-life situations. And love....

Denim is the 4th book in KC Well's Material World series. I have loved the series so far, and this one holds up to my expectations.

When Tony hits on Harry, Harry can't help but to think it' a cruel joke. Harry assumes that no one could possibly be attracted to him. What follows in a wonderful story of gaining self-confidence and a great exploration of what people are attracted to in body types.

Harry's appearance is what weighs Harry down. He is the classic example of self-loathing. He thinks he's hairy and overweight and completely unattractive. When he realizes Tony is actually into him, he starts to try to lose weight and starts skipping meals.

I love that Tony can help Harry to realize that people actually find Harry attractive. He explores the world of bears with Harry.

I love the ongoing theme of Harry's lack of confidence. We get glimpses of how much and how many different ways a lack of confidence can negatively affect someone. All Tony wants is for Harry to love and appreciate himself.

Denim is a fantastic story. KC Wells manages to create a flawed character who finds his perfect counterpart. It is wonderfully written, as her books typical are, and will keep you reading late into the night.