Coming Out by Avery Ford 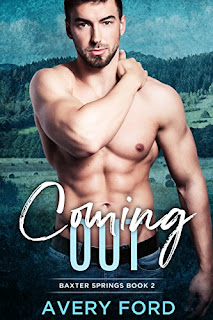 “I have to believe in love. It’s all I’ve got. It keeps me going.”Ryan Turner is looking for a better life. His abusive, alcoholic father has been getting worse ever since his mom passed away twelve years ago. Struggling with his sexuality, Ryan works hard, takes night classes, keeps his head down and does his best to look after his dad, but he’s not sure how much longer he can keep it up. If he just had a little time, a little space to work out his feelings, a little money, maybe he could make things better—for himself and for his dad. “That kind of love doesn’t happen to guys like me. It doesn’t exist in my world.”Eric Harper doesn’t believe in love. Not when it comes to finding it for himself, anyway. Not the kind of love his brother found with Chase. Or the kind of love his parents had. Maybe it’s because he lives in the small town of Baxter Springs. Maybe it’s because he hasn't really put himself out there to find the right person. Maybe it’s him. “Sometimes love is unexpected. Sometimes it’s even inconvenient. Sometimes, you have to take a chance…”When Eric hires Ryan to work at the ranch, it’s supposed to be a temporary position. Just two or three weeks. That was the plan. The part that wasn’t planned? The sizzling chemistry between them, and worst of all…. falling in love.This is Book 2 from the Baxter Springs series. While it is a standalone novel, you may enjoy reading Coming Home first to meet the rest of the crew!

I am an avid fan of Avery Ford, so I am thrilled to get to read Coming Out.

This book focuses on Eric and Ryan. Eric has had to watch his brother fall in love and get married. He is happy for them, but he doesn't ever plan on finding that kind of love.

Ryan is a new, temporary employee of Eric's on the ranch. Neither expects the chemistry between them. They just click immediately, as if they have always known each other. Neither expects anything to come from this chemistry though.

Ryan's father is an alcoholic and makes life miserable for Ryan. Ryan has clearly seen and witnessed too much in his life. Eric knows he shouldn't get involved, but he wi too tempted and decides to take a chance. He has never been attracted to a guy before, but he really wants to see what could happen.

I absolutely love Ryan. His attitude is amazing. He has it so damn rough, living with his dad and putting up with way more than he should have to. But, he never allows himself to feel too down about it. He knows his life isn't great. But he also knows that everyone else also seems to have problems. Thus, he isn't convinced that anyone else has a better life that he has. What a refreshing way to look at things. He would rather be happy than not, so he chooses to be happy.

One of my favorite quotes from it is '“Sometimes love is unexpected. Sometimes it’s even inconvenient. Sometimes, you have to take a chance…”'

When they decide to get involved with each other, Eric is willing to take a risk. But Ryan is hesitant. He is afraid that Eric had never been with a guy before and might not be able to come out to people. On the other hand, when he is with Eric, he feels safe. Ryan knows that he can count on the gentle, caring, and strong man.

And Eric. Oh, sweet, sweet Eric. He is so determined and dependable. Once he decides to be with Ryan, he doesn't look back. He doesn't care about labeling his sexuality.  He doesn't care what people will think. He just knows that he wants Ryan in his life and he isn't going to let himself live in fear or secrecy.

I love the way the author deals with Ryan's alcoholic father. Everything is so real, so raw, and yet, the fact that he isn't actually an awful person is refreshing.

Overall, Coming Out is another fantastic book by Avery Ford! I highly recommend it.