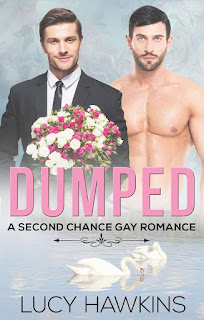 Wedding planner, Alex Haynes, is left heartbroken and humiliated when his fiancé leaves him at the altar. Too ashamed to show his face in Manhattan again, Alex flees for his Upstate hometown and vows never to plan another wedding again. When his best friend announces her engagement, she begs him to reconsider his decision. Torn between his duty as BFF and his newly acquired cynicism for love, Alex reluctantly agrees. Little does he know that by agreeing to do so, he’s also agreeing to work with his high school bully, Hank.
Once a college football star heading for greatness, Hank Morrison now runs the inn he inherited from his aunt in the small town of Redwood. The problem is his aunt’s beloved inn isn’t getting business and with the bank threatening repossession - Hank needs to come up with a way to acquire money fast. When his high school crush and nemesis Alex shows up wanting to plan a wedding at the inn, he can’t turn down the kind of money on offer. Even if it means having to deal with the uptight wedding planner who always thought he was too good for him.
Forced into close proximity, the two can’t help getting to know each other. Uncovering each other’s secrets and painful pasts pulls them closer together. But with so much complicating each of their lives and their warped views on love, will it ever be possible that they’ll be on the same page?

I am so excited I had a chance to read Dumped by Lucy Hawkins. I found myself intrigued by the blurb, and the book did not disappoint.

Alex, a big city wedding planner, is dumped at the altar by his fiancée. He is devastated and shocked. In shame, he returns to his small hometown. There he is reunited with his Hank, his former High school bully and a retired pro football player. They are forced to work together on planning a wedding for Alex's friend. This allows them to get to know each other. Neither are the same person that they were in high school.

In time, Alex is able to see that his former relationship with his ex-fiancée was not so good. He realizes that he constantly had to bend to his ex's demands. He thought his ex wanted what was best for him, but now realizes he just wanted to mold Alex to his needs. His sister works at making him realize that he needs to learn to love himself now.

As Alex and Hank become friends, then start to learn more about each other. For instant, Alex learns that Hank is actually gay.  That starts a romantic relationship.

Alex and Hank have obstacles to face along the way.

Alex is hesitant to continue as a wedding planner. He is also reluctant to enter into another relationship. Hank, meanwhile, is on his own, trying to keep his deceased aunt's inn open


. He is also searching for his brother who disappeared. He won't allow himself to  give up hope of finding him. This means that Hank's financial situation is not very good.

One of my favorite themes about this book is that things are not always as they seem. Alex's perception of Hank during high school could not have been more wrong. And, even more importantly, people need to move on from their past. You cannot let what people have done in the past define your life now.

I also love how things can change for the better when you have someone helping you.

Dumped is a well-written, small town romance. It is sweet, funny and romantic. Lucy Hawkins does a fantastic job of making you remember that sometimes bad things happen for a reason. I highly recommend this book.