Bottom of the Class by Lina Langley 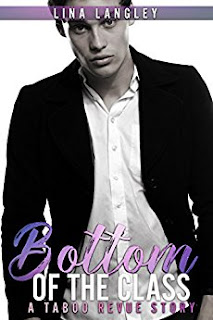 Blurb:
You only get to have your senior year once.
And if Callum George can never live his last wild year of high school again, he's going to make sure it's the best one of his life. He'll audition for every role. Drag his friends out on every whim. Do anything and everything he wants, no matter how wild.

And anything and everything he can to forget his parents' recent divorce.
But he never expects the distraction he needs to come in the form of his new drama teacher. Mr. Redford is the most gorgeous man he's ever seen in his life...and completely off limits.
That won't stop Callum from trying.
Not when the thrill of secret touches, the promise of the forbidden, makes Mr. Redford even more enticing. Not when under the teacher's seemingly cold indifference smolders a desire just waiting to break past its boundaries. Callum knows it's wrong. Redford knows he can't.
But when can't only makes them want it more...Callum will discover a new side to discipline when he ends up at the bottom of the class.
This story is approximately 30,000 words in length and contains adult language & explicit erotic scenes. Content warning for stalking, internalized homophobia and a student/teacher relationship.

Callum's current home life is not so good. His parents are getting divorced and he needs to watch his sister a lot. All of this in his final year of high school

As he gets to know Mr Redford, he realizes that he has never been so at ease with a teacher before. He enjoys seeing the different sides of Mr Redford when they are outside of school. Callum learns that his teacher was once going to be an actor, but came home to help his parents. Although his acting dreams never were fulfilled, he is happy helping others to follow their dreams. He wants to make a difference, at least in helping the drama program, but hopefully with some lives too.

With Bottom of the Class, I am absolutely shocked with how much I enjoyed the story. There is so much more to it than just a forbidden teacher/student relationship. The author does a great job of developing these two men. The issues that surround each of them are complex.

They have to deal with family issues and being stalked, in addition to the fact that their relationship is forbidden. Their journey is an emotional ride that I enjoy a lot. The ending is just beautiful. I found myself an emotional wreak while reading it. It is just perfect!

I highly recommend Bottom of the Class by Lina Langley.