(Watch Me) Break You (Run This Town, Book #1) by Avril Ashton 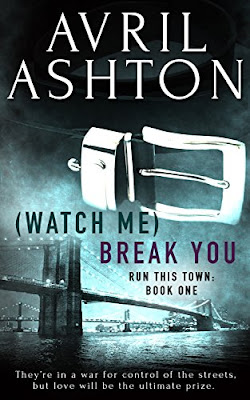 Amazon Link Goodreads Link BLURB
They’re in a war for control of the streets, but love will be the ultimate prize.
Here comes trouble… Men. Women. Drugs. Dima Zhirkov’s favorite things. Add in the element of danger and he should be right as rain. But not today. It’s not working, hasn’t for a long time. He’s grasping at the flimsiest of straws to prove he’s indeed strong enough to run his streets. Until he sets eyes on him. In the midst of a room full of strangers, Dima is drawn to a man as cold and dangerous as he is beautiful. Captivated, Dima embarks on a ruthless campaign to get his new toy into bed.
Here comes the danger…Xavier “X” Storm is content to pull the strings while someone else handles the day to day dealings of his gang, The Rude Boys. He’s after what Dima holds closest—the Coney Island streets. He contracts out the job of killing the Russian, except Dima isn’t that easy to kill. When he suddenly shows up in X’s path, tempting him to indulge in the dirtiest play, he finds Dima isn’t all that easy to shake, either. His cocky attitude and rough submission tempts X to go where he’d vowed to never return, and they plunge head first into an affair fueled by possessive obsession.
Run for cover Sex and pain Dima can handle, and X delivers the most depraved kind. Their connection is explosive, their games addictive, but Dima can end it whenever he wishes. He doesn’t see that X is breaking him down, giving Dima everything he wants and even more than he ever thought to need. By the time he realizes who X is and what he wants, Dima is raw and bullet riddled. It’s run or fight. And Dima doesn’t back down. Neither does X.
***** Warning: Includes strong BDSM elements, violence, and gun play *****

Avril Ashton's (Watch Me) Break You is one hell of a gritty, tough and powerful story.

It is one complicated, intense and action-packed book. Both men are bad men, caught up in some serious life threatening situations.  You'll find lies, deception, murder, and passion! And, yet, somehow Ashton find humanizes these men, leaving us felling empathy for them. I am still shocked at how well this was achieved, as it is not an easy thing to do.

It is so unusual to have two such bad men actually finding love and passion for each other. Normally, these two men would never be able to open up and risk their hearts. They also wouldn't normally be the type to forgive. X and Dima are two accomplished, well developed, and deep characters.

In an nut shell, Avril Ashton, I am super impressed and amazed with (Watch Me) Break You!