No Shame (No Shame series #4) by Nora Phoenix 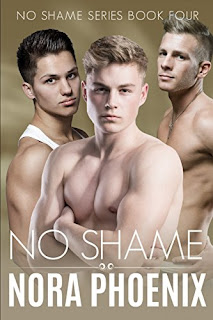 Brad feels nothing but shame about himself. Shame about his sexual needs, about his reputation, about his medical problem no one knows about. No one, except his best friend Charlie, but no matter what feelings Brad may have for him, he’s not going there. Charlie deserves so much better, and Brad desperately needs something not even Charlie can provide.Charlie has loved Brad forever, but he’s never acted on his feelings, unsure of where he stood. Plus, there was the complication of having a boyfriend. But when his boyfriend’s abuse gets too much for Charlie, it’s Brad who helps him escape and recover. Miles ends up wounded in the line of duty as an FBI agent. He’s floored when the man he was protecting, Indy, opens his home to him so he can recover. Indy also sets him up with Brad, who turns out to be a perfect solution for Miles’ sexual issues…until Miles wants more than sex from him, and a developing friendship between Miles and Charlie complicates things even more.Bit by bit Charlie and Miles break through Brad’s defenses until they come crumbling down. Miles will have to prove he can provide what Brad needs, and Charlie’s sweet love will be put to the test. But when Brad finally finds the courage to break free of his shame, will the fragile love that has blossomed between the three of them survive?No Shame is a steamy M/M/M romance and the fourth book in the No Shame Series with a continuing storyline (it's not suitable to read as a stand alone). It ends with a happy ever after for all characters, including those from the previous books in the series. Please note the trigger warnings in the front of the book.


No Shame is the 4th and final book in the No Shame series by Nora Phoenix.  And it is the perfect conclusion.

As with the prior books, No Shame, features all of the guys we've already met. Each guy continues to grow and it is just fantastic.

And the sex, oh the hot sex!

I cannot do justice to the strength and power of the relationship between Noah, Indy, Josh and Connor. It is truly remarkable the way Nora is able to construct the bond between these men.

And, let's not forget the inspiring relationship between Blake and Aaron, as well as the dynamic throuple of Charlie, Brad and Miles. Nora manages to far exceed my expectations with this entire series.

Did I mention the hot sex?

The only bad thing about No Shame is that it is the end of the series. It isn't everyday that I find a series that I absolutely love and devour so quickly. If you haven't read this series by Nora Phoenix, all I can ask is - What are you waiting for?