The Fighting Dutchman by Olivette Devaux 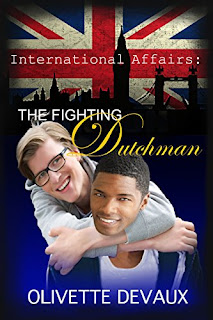 Bryan Clark, a geeky, cute professor in handsome glasses. Too bad things are tense between him and his MMA star brother Caleb. Being a good brother means rooting for Caleb to win – except for those times he wishes Caleb got a bit of his own medicine. Linguistically brilliant Arne Visser, a Dutch MMA rising star with a bit of African heritage and academic parents, just about gave up on getting a degree in programming. But maybe writing his own code is enough to break into a competitive market. Going back to school is hard in Europe, and he’s aging out of a tough contact sport.A chance meeting, instant chemisty, and crazy international travel just might make Arne come out as bi for Bryan – but the nine-hour time zones between their home cities won’t be erased with just a press conference. No hot men were maimed in this heart-warming, action-packed introduction to the International Affairs series!


Wow! I am completely impressed by Olivette Devaux's The Fighting Dutchman!

I found myself instantly drawn in by both the writing style and some of the unique aspects of the story. A geeky cute professor lusting over a biracial MMA fighter. Two brothers who mix like oil and water. A brother lusting after his brother's MMA competitor. A mother who's the one who introduced her son to the sport. So compelling.

I love the uniqueness of Bryan and Arne, coming from such different worlds, and their first meeting is great.

One instantly feels for Bryan, as his family is not exactly supportive of him, preferring his younger brother over him.  Arne meanwhile, who's 32, is struggling to figure out his life outside of the ring knowing his fighting career will be ending soon.

I absolutely adore the way they get together, the fight between Arne and Bryan's brother, and everything else. The family issues are so damn realistic and well written. I found myself chuckling, cringing, wanting to yell at Bryan's family, and smiling so much for these boys.

Oh, and the sex scenes are as funny as they are sweet!

The Fighting Dutchman is outstanding, with some memorable themes, captivating characters and a remarkable romance. Definitely checkout this great story by Olivette Devaux!