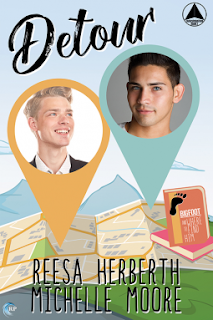 Ethan Domani had planned the perfect graduation trip before tragedy put his life on hold. Smothered by survivor’s guilt and his close-knit family, he makes a break for the open road. He doesn't know what he's looking for, but he's got the whole summer to figure out who he misses more: his boyfriend, or the person he thought he was. It’s just him and his memories . . . until he almost runs over a hitchhiker.
Nick Hamilton made some mistakes after his younger brother died. His violent ex-boyfriend was the most dangerous, and the one that got him shipped off to Camp Cornerstone’s pray-the-gay-away boot camp. His eighteenth birthday brings escape, and a close call with an idiot in a station wagon. Stranger danger aside, Nick’s homeless, broke, and alone. A ride with Ethan is the best option he’s got.
The creepy corners of roadside America have nothing on the darkness haunting Ethan and Nick. Every interstate brings them closer to uncharted emotional territory. When Nick’s past shows up in their rearview mirror, the detour might take them off the map altogether.

In reading Detour, I had no idea what to expect, and I am so pleasantly surprised by how wonderful it is.

Detour is a tale of two broken boys, meeting up by chance, and learning how to believe in themselves and heal.

Ethan had been planning a road trip, post graduation with Scott. Now that Scott's gone, he sets off on the trip alone. Everything changes when he ends up picking up a stranger, Nick, during a storm at the beginning of his trip.

As Ethan helps Nick, he is completely unsure of him, not knowing if he's a runaway, or why he's traveling alone. Ethan just couldn't abandon him, feeling it's the right thing to take Nick with him on more of his trip.

I absolutely love that Ethan doesn't force Nick to tell him the truth, knowing it's just too difficult. As Ethan tells him to lie and make up his story, what follows is fantastically funny, as well as sad.

Ethan and Nick are just so damn loveable and broken. Their lives have not been easy and both are suffering and unsure of what to do with their lives. They have both faced horrific traumas and are lucky to have found each other.

As they continue on their journey, they open up to each other and end up finding a whole lot more than either expected.

The authors have done a terrific job with this unexpected story, telling it with so much heart, some nice humor, and a whole lot of compassion. It is emotional, heart-breaking, and remarkable. I am so happy to have stumbled upon Detour, as it is an absolute gem.