Love Me Louder by Christina Lee 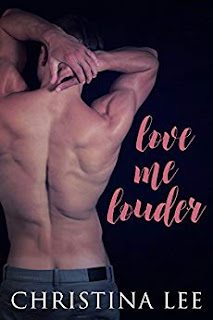 
Noah Dixon is damaged goods. After an accident leaves him physically scarred and emotionally vulnerable, dating isn’t in the cards, so he throws himself head-first into his retail job. When he’s obligated to attend his best friend’s engagement party on Fire Island, it dawns on him he’s about to spend yet another weekend feeling totally invisible and alone among a swarm of gorgeous men. That’s when the idea of an escort comes in.After Will Crossen was forced to put his theater major on hold in favor of two jobs to tackle his ailing mother’s hospital bills, he tells himself becoming an escort isn’t that big of a deal. It’s just another form of acting, right? He doesn’t expect his newest customer to be the cheery, overconfident sales associate he avoids like the plague at his day job. Talk about awkward.But what happens on Fire Island stays on Fire Island…especially when a smoldering attraction sparks into flames. Will doesn’t feel so alone anymore, and for the first time, Noah realizes someone is seeing him behind all the scars. But between their jobs, Will’s massive familial responsibilities, and Noah’s vulnerabilities, they don’t stand a chance unless they find a way to let love speak louder than their demons.

Love Me Louder, by Christina Lee is M/M at it's best!

Noah and Will's relationship is absolutely mesmerizing and memorable.

They begin as a fake relationship, with a lot of misconceptions, and continue to deal with their insecurities, self-doubt, and their inability to love.

Noah is scarred from an accident and spends his life trying to hide, both physically, and mentally. He keeps everyone at a distance, refusing to let them get close to him. And he certainly doesn't have any self confidence that would allow him to risk his heart.

Will, meanwhile, would appear to have it all, but is struggling to pay his mom's medical bills by working two jobs, one at the home décor store with Noah, and the other as an escort.


What starts as a fake relationship/business deal, turns into so much more. Their love is beautiful, real, and deep. Unfortunately, both men are still struggling to let go of their pasts and accept this love.


The title of this book is perfect, as to love someone, you need to love them loud, for it to be seen.

This book does a great job with showing how easy it is to make the wrong assumptions about people. Sometimes, just a few conversations can change the way you view someone.

I adore the physical moments in this romance, as their are precious comfort moments, along with some fun kink involving fishnet stockings!

In all, Love Me Louder, is an amazing story, another winner for Christina Lee.