Thich As Thieves by Cyan Tayse 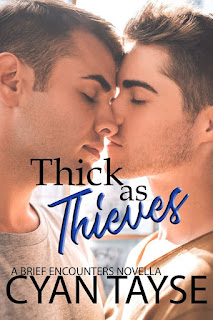 A home invasion, a half-naked guy, a foam sword, and a whole heap of secrets.When Leo breaks into the Van der Kley residence, he expects it to be smooth sailing. What he doesn’t expect, is to find Alexander Van der Kley waiting in his room with his abs on full display. The studious nerd from school suddenly becomes a lot more interesting.


Thick As Thieves, by Cyan Tayse is an amazingly fantastic surprise.

At it's essence, it is about two young men who are just trying to survive their mixed up lives.

Their interaction begins while Leo is attempting to rob Alexander's house, with him finding Alex in his boxers. Alex could never have thought that catching a thief while he's in his boxers could end up leading to a great friendship which will change his life.

People are not always as they appear. Leo thought this rich family had it all, yet little did he know the crap that Alex has to deal with everyday.

And, as for Leo, there is so much more than meets the eye. He may be a petty thief in his spare time, but on a daily basis his life is one hardship after another. He is truly faced with way more than an 18 yr old should have to deal with.

I completely fell in love with both of these young men. Alex, a sweet young man who just can't wait to escape to college, for some reason just calms the storms in Leo's head. And Leo, despite first appearances, is one of the most caring young men ever, with an absolute need to take care of people. Neither thought their chance meeting would lead to more, but in the end they each find the one person they can share their troubles, which leads to so much more.

Be warned that along with funny and tender moments, this book contains a lot of tough topics that are heartbreaking.  Fortunately, it also contains the most precious 3 year old ever, who while have your heart melting.

Thick As Thieves is well written, in a impressive, serious and thoughtful manner. I found myself laughing, sighing, crying and so damn riveted to this powerful story. Thank you Cyan Tayse for creating such a unique and unexpected romance.