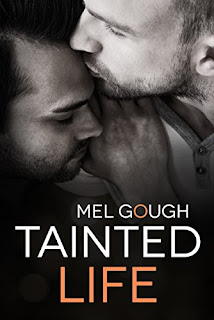 
Metropolitan Police detective Pete Tucker’s world comes crashing down when his wife sues for divorce and sole custody of their only son.
Desperate to forget his sorrows for a while, Pete seeks refuge in a Soho bar where he is approached by a sexy, funny, and clearly interested stranger. Photographer Liam Jackson is just the ticket for one oblivious night of perfect passion.
However, their attraction proves too intense for a one-night-stand. To his surprise, Pete finds that he’s game for something more – but his baggage soon gets in the way. Then Liam’s own dangerous secrets claw their way to the surface, and threaten to derail the budding romance.
Is their growing bond strong enough to weather the violent storms ahead?

Tainted Life is the first I have read anything by Mel Gough.


When Pete meets Liam, he thinks he might have found the distraction that he needed. It's been years since Pete has been with a man, and he's excited for this opportunity. Their one night stand ends up leading to so much more after some crazy events take place.

This story is a well written, fast paced, quick story that contains a custody fight, an attack, and a crazy brother. If they can work through some of their personal issues, they might be able to find love.

But only complaint is how fast everything happens. I would have preferred a little more development between the characters, but that is just part of the plot.

Tainted Life is worth a read if you have some time and are looking for an action romance.