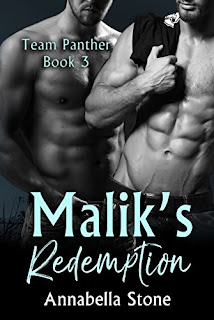 Ex- Mossad agent Malik Dahan has lived for years in the shadows, straddling the very fine line between his own moral code and the missions his assassin role required. Two years ago, refusing an order from Mossad's Operations Base near Glilot Junction on the west end of Tel Aviv put him on a collision course with Team Panther. The time has come for Malik to face his demons and the secret he has been hiding. A secret that can rip apart the very essence of everything that is Delta Force – Team Panther.Zeke Givens seized the chance to escape the mob violence he grew up with to become a Texas ranch hand. Months later the last man he expected to see on the ranch is the hottest one night stand he could ever remember. A man who stole his breath and drew every protective instinct he had to the fore. Zeke will use every dirty trick and all the skills he learned at his father’s knee to protect Malik, even if it means losing the only family he has left. Can a one-night stand turn into a Happy Ever After? Malik just needs to stop running long enough to realize that Zeke is his redemption and their happy ever after is right there waiting for them.Malik's Redemption is part of the Delta Force - Team Panther Series. While it can be read as a standalone... to ensure maximum enjoyment, it is best read in series order.


Malik's Redemption is an enthralling addition to the Team Panther series by Annabella Stone, picking up after the other books. It can be read as a standalone, but it helps tremendously to have read the others.

Malik and Zeke have an intense hook up after meeting, with Zeke leaving before Malik even turns around. Several months later, they meet up again, as Zeke is a brother to Malik's team member, Steele. Despite the sparks still being strong, Malik knows Steele would kick his ass for hooking up with Zeke.

Malik is back with his team, but doesn't want to be here, afraid to bring them into his troubles. Even worse would be bringing trouble to Zeke. Unfortunately, it's not so easy for Malik to stay away from Zeke and avoid the terrible consequences.

I adore these men, as individuals, but even more as a couple. I love the way Malik wants to protect Zeke, and the way Zeke wants to be there to help him. Both are so strong in their convictions to help the other. I also adore the different sides of each man, as they are both strong, yet soft.

As the story progresses, the action starts to really pick up with Malik fighting for his life, and to protect his friends. The Team Panther group will all need to pitch in again. There is a lot of research, plotting and execution of plans to be made, along with solving some questions about Malik.

Malik's Redemption picks up where Tied Up In Steele leaves off. If you like action, suspense, romance and some hot sex, you will love this book, and the other Team Panther books by Annabella Stone.