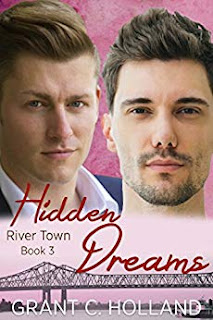 Puck doesn’t think he can handle any more bad news. He’s a widower with a baby just eight weeks old. His wife Miranda died suddenly and unexpectedly just twelve hours after Addie’s birth. With the world turning dark, and the future looking grim, hope reappears when a handsome blonde, blue-eyed man brings a grocery store disaster to a halt with a ring of shiny keys.Ross is restless in the small river town of Coldbrook Bend. He left his hometown to escape a bad relationship, but he’s been unable to find someone new. Despite enjoying the support of a rich set of new friends, he’s considering abandoning the small town life for the twin cities of Minneapolis and St. Paul. When he least expects it, a widower with an adorable baby appears to shake up all of his plans.Puck has never kissed a man before, much less had a relationship with one. However, his desire to be with Ross is not as unprecedented as he originally thinks. After another chance meeting on a snowy winter night, they are soon enjoying a joyful domestic life together. Unfortunately, life has one more stroke of bad luck in store. Both Ross and Puck will need to call on all of their resources to make their once-hidden dreams come true.Hidden Dreams is a 50,000 word slow burn, first time gay romance. It has steamy scenes and no cliffhangers. It’s the third novel in the River Town series and includes characters from the two previous books. However, it can easily be read as a standalone novel.

Hidden Dreams is the 3rd book in Grant Holland's River Town series and each book just keeps getting better.

If you haven't read this series yet, please go check it out. Grant Holland has created a wonderful small river town, where some fantastic characters live. I have completely fallen for the small town's charm. It is so well described that one can totally imagine the town and feel like they are there.

In this story, I love Puck and Ross, the way their relationship develops and Puck's falling for a guy for the first time.

And I would be remiss to not mention Addie, Puck's daughter, who is absolutely charming and manages to have everyone fall in love with her!

Hidden Dreams is everything you'd want from a sweet romance. I can only hope that Grant Holland continues to write about this town!