Down to Earth by Jena Wade 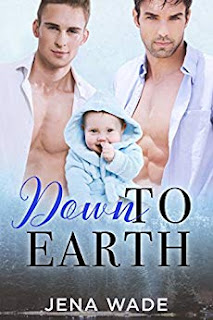 Everett Surlin longed for the day that his Fated mate finally recognized him. It’d been eight years since he’d first met Matt Jenkins, he’d never imagined it take this long for his mate to realize their connection. Matt Jenkins had done his best to put his past behind him. The abuse he’d endured as a child stayed locked away inside him, never to be shared with anyone. He’d assumed that as a result of his upbringing, he was broken and he would never have a mate. That didn’t stop him from desiring Everett and wishing that they could be together. When tragedy strikes, Matt stays at Everett’s side, which just might be the push he needs to discover what had been there all along and a future he never dreamed would be possible.********This is a 26K non-shifter mpreg novella featuring a sweet romance, a HEA, and no cliffhanger.

This is the second book in the Directions series, but can be read as a standalone.


Down to Earth, by Jena Wade, is a sweet little mpreg romance.

Things aren't easy for these two. They have to deal with their unknown feelings for each other, a loss, and some issues from the past. They definitely could have used better communication skills.

The only thing I didn't love was that the action and suspense was wrapped up so quickly.

Down to Earth is a story of discovery and healing. I really enjoyed Everett and Matt, as they are adorable and perfect together. Jena Wade did a good job with this second book in her Directions Series.