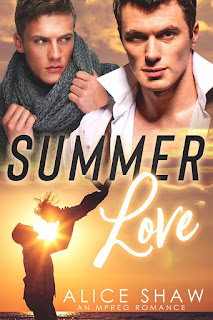 It started as a fleeting moment, but it turned into the summer of their lives.  In every alpha's life there is an omega he'll never forget, and a summer where it all started. For Riley, that began with a young man who was desperate for a change. As soon as Riley saw that omega’s royal blue eyes, pink lips, and smooth skin, he was head over heels.  Alpha Riley was starting over in the freshly built town of Belleview Bay. His criminal past was something he just wanted to leave behind completely. All he aspired to do was open his very own restaurant. To move on. Too bad he didn’t have a cent to his name. Omega Holden never believed in love, but he sure did believe in fate. At his core, he was a dream chaser. His parents, however, owned a family business, and they weren’t so keen on letting him leave.  Destined for something greater, he placed his things into a bag and left home for good. Within weeks, he was sh*t out of luck. With nowhere to turn, he was ready to give up. That is, until he saw Riley. They both yearned for the unattainable. Alone, success felt impossible. But together, they could have had it all: Love, adoration, and a darling baby to complete their family.

Summer Love is a full-length gay second chance romance novel. It is 52,000 words. This book contains hot and sexy scenes, emotional moments full of desire, and a beautiful baby to fill your hearts with love. This mpreg book is meant for 18+ readers.

Summer Love, by Alice Shaw, is a great new mpreg book that will take you on an emotional journey.

It's a story of 2 drifters, finding one another by chance, and ending up with more than they could have ever expected.

Holden, an Omega, is looking for a fresh start. He's left home due to family issues and is in trouble when a cop stops him. As he's stuck, lost, alone, with nothing to his name, Riley, an Alpha, steps in to help him.

Riley's trying to start over again, working his food truck. He's a drifter with not much to his name, but he just feels a pull towards Holden, and feels that he needs to help him. Unfortunately, his past is always following him and continues to cause problems.

This story is written well, with a couple of admirable men looking to move on from their tough pasts. The two men bond quickly, with a strong connection and an intense attraction. Their journey will not be an easy one. Their new-found hopes and dreams will have roadblocks, but true love will be on the other side if they can works past everything.

I definitely recommend Summer Love to any non-shifter mpreg fans as Alice Shaw again does a good job with this story.