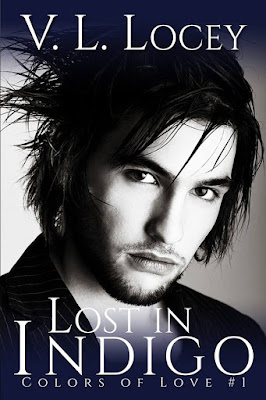 Mathieu Beresford was so close to seeing his dream come true.


The thirty-eight-year-old captain of the Buffalo Surge had led his team to the final round of the playoffs with his aggressive defensive play and leadership. During the first game of the championship series, he was taken down, and his leg snapped upon impact with the boards. From his hospital bed, Mathieu watched his team go on to win it all.


Adrift in anger, resentment, and the new direction of his life, he returns to his mansion along the St. Lawrence River. Alone and sulking, Mathieu is not prepared for Indigo Neu to enter his life. The genderflux twenty-year-old botany major signs on to play nursemaid, confidant, and groundskeeper over the summer and slowly leads Mathieu out of his confusion––one tender smile and touch at a time.


The deeper Mathieu falls, the more he wonders if being lost might not be so bad after all.

Lost in Indigo, by V.L. Locey, managed to absolutely wow me and force its way onto my all-time favorites list.


Mathieu, a gay, closeted hockey player, returns home to his mansion to heal from an injury. Told to rest, recover and start rehab while he is home, he ends up being cared for by his old groundskeeper, Montclair, and his son, Indigo.


Having played since he was five, Mathieu is confused about how to move on with life if he loses hockey. With the sport his everything, he’s unsure how to replace it.
Seeing Indigo for the first time in years, Mathieu is surprised by the change in Indigo’s appearance. He’s wearing makeup and what appears to be a dress. Mathieu just can’t stop looking at Indigo’s lips and wants to kiss him to confirm he is wearing lipstick. He even tells him, “‘You’re cute’”.


The genderfluid Indigo is adorable, loveable, and refreshing. It is fantastic that Indigo’s father supports him, despite a lack of understanding. And it’s breathtaking how Indigo’s presence helps lighten Mathieu’s day, helps him to feel alive, and lessens the depression from his possible career-ending injury.


Mathieu and Indigo are sweet together. In particular, I adore their age difference and the fact that Indigo’s young age is part of Mathieu’s appeal, along with his laugh, smile and the way he dresses and moves. Mathieu loves that Indigo is a smart and compassionate man, who’s filled with dreams and strong opinions.
For the two men to remain together, they need to deal with a homophobic nurse, the fact that Mathieu is closeted, and the impending departure date for Indigo, as he returns to college. In addition, should Mathieu come out, he’s unsure he’d be okay in public with a man who wears dresses, makeup and nail polish.


One of my favorite lines in the story is when Indigo tells Mathieu, “‘Small steps can lead to big changes.’” It is particularly relevant to Mathieu, but it is something everyone should remember. Another is when an island widow tells Mathieu, “‘Open your eyes and heart, Mathieu. I’m sure it’s closer than you think.’” I find this line to be far-reaching, as people often fail to see what is right in front of their eyes.


Lost in Indigo is an enthralling tale, as V.L. Locey combines a tough hockey player with a genderfluid man half his age. The fact that V.L. does so in such a beautiful, romantic way, is impressive. To me this is a must read! I’m looking forward to more in this new Colors of Love series.

Email ThisBlogThis!Share to TwitterShare to FacebookShare to Pinterest
Labels: 5 Stars, coming out, gender fluid, hockey, may to dec, VL Locey