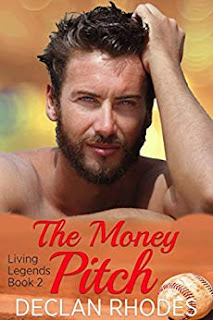 
Jack had friends from college who married men more than thirteen years older than them, but he didn't know anyone who dated their father's number one enemy.

Jack Madison is a 25-year-old graduate student working through his academic program while completing a book project on his famous father, baseball relief pitcher J.W. Madison. Charlotte, North Carolina is his home city, and also the home to the recent baseball expansion franchise the Charlotte Yellowjackets. Mo Sadler is a 38-year-old big league relief pitcher nearing the end of his active playing career when an off-season trade brings him to Charlotte. After getting over the initial shock of being sold off to a team with little hope for making it to the postseason, Mo is pleased to be playing in close proximity to North Carolina's Outer Banks, the location of his treasured beach home. An interview opportunity for Jack's book brings them together at Mo's Hatteras Island house and attraction blossoms into desire. There are only two big problems. Mo is Jack's father's legendary baseball enemy, and Jack abhors the celebrity spotlight. Both men know the relationship should be impossible, but the heart wants what it wants and won't give up so easily. Mo's money pitch in baseball is the slider. Faced with a relationship in the process of crumbling, he sets out to concoct a real-life money pitch to permanently win Jack's heart. The Money Pitch is a 54,000-word gay baseball romance with steamy scenes, a happily-ever-after ending, a lucky rabbit's foot, and dancing on the sand. It is the second in the series Living Legends following A Brand New Ballgame. Multiple characters appear in both books, but it can be read as a standalone novel.

I have been a fan of Declan Rhodes' sports romances for a while, and The Money Pitch is as great as the rest of them.

It is such a fun book, with a 13 year age gap, and Jack dating his father's rival. Such a wonderful concept.

And, as always, Declan's writing style is fast and intriguing, keeping the reader hooked until the end. The characters are compelling, irresistible and complimentary.

This story definitely has less of the romance factor than previous ones, and the chemistry isn't as pronounced in this one, but I still love it. I like both Mo and Jack a lot, and I enjoy the natural progression of their relationship. I also like the look into how growing up with a dad in the pros accepted both Jack and his mom.

I recommend The Money Pitch to anyone who likes a good sports romance.