My Crunchy Life by Mia Kerick 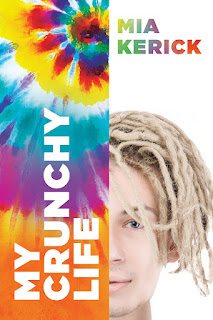 BLURB
John Lennon fought for world peace, but sixteen-year-old hippie hopeful Kale Oswald’s only made it as far as tie-dying his T-shirts with organic grape juice. Now he’s ready to cement his new hippie identity by joining a local human rights organization, but he doesn’t fit in as well as he’d hoped.
After landing himself in the hospital by washing down a Ziploc bag of pills with a bottle of Gatorade, Julian Mendez came clean to his mother: he is a girl stuck in a boy’s body. Puberty blockers have stopped the maturing of the body he feels has betrayed him. They’re also supposed to give him time to be sure he wants to make a more permanent decision, but he’s already Julia in his heart. What he’s not sure he’s ready to face is the post-transition name-calling and bathroom wars awaiting him at school.
When Kale and Julian come face-to-face at the human rights organization, attraction, teenage awkwardness, and reluctant empathy collide. They are forced to examine who they are and who they want to become. But until Kale can come to terms with his confusion about his own sexuality and Julian can be honest with Kale, they cannot move forward in friendship, or anything more.
Sometimes, he weeps with you.
REVIEW - 4 Stars!
I am glad to have discovered My Crunchy Life by Mia Kerick. It is a well written young adult story that hits on several tough topics.
In the beginning, Kale is in the middle of a tough time, trying to discover his true self, exploring a hippie, aka “crunchy” personality. He has dreadlocks, is only doing green things and has a desire to find a good cause, in alignment with the hippie way.
On the outside, Julien is a brilliant teen boy, who doesn’t fit in at school and is frequently the target of bullies. After attempting suicide last year, he’s seeing a therapist and has girls assigned to be his friends at school. On the inside, Julien is a teen girl, trapped in his male body.
Mia Kerick uses alternating first person points of view to do a fantastic job of telling this story of two teens who are in complicated family situations. By doing so, the reader is able to fully connect with these adolescents.
Julian’s gender-dysphoria and his stages of transition are one of the main story lines. He’d love to postpone transitioning, but he knows he cannot live as a male anymore and he feels guilty that the cost of transitioning results in his mother working so much.
My Crunchy Life also tackles a couple of issues through Kale’s strange home life. Kale’s mother has completely disconnected from her family after being laid off from her job. Kale’s cousin, Hughie, with whom Kale has been forced to share his room, was found living under a bridge. Kale doesn’t want him sharing his room, constantly reinforcing this, never giving any thought as to how this affects his cousin.
As Kale’s character deals with questioning if he’s gay, and later finding out that Julian is now Julia, I found myself sympathetic toward him. In the end, we watch as Kale come to terms with himself and discovers who he is and what type of person he wants to be.
I’m impressed with this coming of age, transgender story. My Crunchy Life is full of those questioning teen issues, some painful family issues, and learning what acceptance truly means. Although it deals with an array of tough issues, it is more about personal growth and acceptance and is actually low angst and sweet, with the perfect young adult feel. Fabulous for questioning teens.