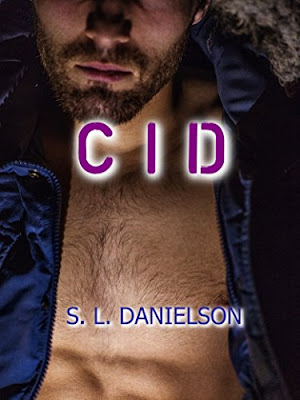 Ask 26-year-old artist Cid Walker how he's feeling and you'll likely get a snarl, or a glare, but not a real answer. Cid's soul is so damaged from a brutal and savage ex-fiancé that trusting anyone is out of the question.Two classmates try to get his attention; Barry and Kellen. Barry is only 18 and a very naïve, sweet boy-next-door type who is young, needy, and anxious to get involved with the mysterious artist. He wants to be with Cid more than anything, but his efforts fail.Kellen, all of 22, is as snarky as Cid is at first, but soon manages to get across to him. Kellen understands why Cid is acting out because Kellen is also keeping his soul and psyche intact with mere Band-Aids after being attacked a few years ago.Add in a stalker that won’t take ‘no’ for an answer and you have Cid’s life at the moment. Who can get through his broken heart?***trigger alert*** mention of past sexual assault 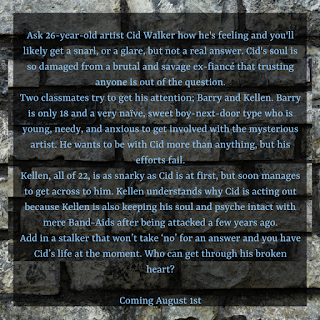 Wow! Going into Cid I had no idea what to expect, but SL Danielson has blown me away with this amazing story.

Cid is broken, just doing his best to survive after a trauma with his savage ex. He is back in school, a loner by preference/necessity, won't let anyone touch him, and continues to hide under his hoodie. He is also being stalked, and needs protecting.

Then he meets Barry and Kellen and things start to slowly change.

Barry is interested in Cid from the beginning and pursues him, trying to burrow his way into Cid's life. In his heart, Barry believes that he and Cid will end up together, despite Cid never giving him an such indication. Cid continues to hold off Barry, despite Barry pushing for more.

This is a story of recovery at it's best. Cid is not just unable to allow romance into his life, he can't even accept friendship. Of course, just as he starts making some headway in his ability to allow friendship into his life, he has a major setback. After a life of failure, violence and pain, he becomes suicidal.

This book is full of heartache, guilt, strong connections, and some great secondary characters. It contains brutal attacks, rape, and survival coming with the help of a wonderful friend.

My heart will not forget this story anytime soon.

In the end, two beautiful broken souls can help one another go from anger, depression and emotional-less to find love and emotional stability.

The road to recovery is not an easy one, but this one is absolutely precious and beautiful. It made me cry, cringe, smile and swoon. It is well written, adding perspectives from other people, thus allowing us to really know Cid.

Thank you SL Danielson for this fantastic, heartwarming story.