Where It All Began by JP Sayle 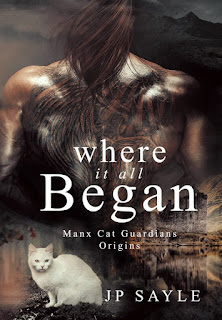 The King of the otherworld, Manannán, witnessing changes to how the love between those who chose differently was being accepted, intervened. Wanting the world to have love and hope eternally, ensuring that soulmates connected without restrictions regardless of the person they chose to love, he created the Manx Cat Guardians.Maximillian, born in the eleventh century, King of his kind, he struggled to always follow the rules King Manannán had laid down. Given no choice about his destiny like his fellow guardians, he’d been granted a Wiccan guide to aid him.Never having had any problems with his past charges, Maximillian finds himself struggling to get his current charge, King Óláfr the Black, to accept his soulmate Magnus, a lowly servant. The connection is strong between them, but the changing times that Manannán witnessed and the introduction of Christianity had Óláfr struggling to accept his soulmate. Ignoring the dire warning from Christina, his Wiccan guide, about interfering, Maximillian finds himself creating ripples from his actions with untold consequences that cause devastation. As he is left to wander this earth, his role irrevocably changed by his actions. He must now ensure promises that were made are honoured, no matter the length of time that passes.Can he help fulfil those promises made by another without breaking the rules again? Or will the souls searching for love be destined to never find each other? Only time will tell.This is the prequel to book 1 and 2 in this series and can be read as a stand-alone, but it does make a small reference to book 2 and will connect into book 3, which will be released sometime in the summer.This book has some themes of violence, along with references to sexual content and one adult situation involving two males. It is only intended for mature adults.

Where It All Began managed to suck me in at the first page, as it is interesting, imaginative and memorable. It is a prequal to the Manx Cat Guardians books, explaining how it all began, and thus answering a lot of questions.
The story is well written, intriguing, including a wonderful historical aspect, that includes the absolute homophobia of the times.
This whole world, created by JP Sayle, is unique, fun and romantic, as the Manx Cats set off to help souls find each other. Where it All Began is a great prequal to the other books in the series.


I previously reviewed Destiny Collides Past and Present.
at July 16, 2018