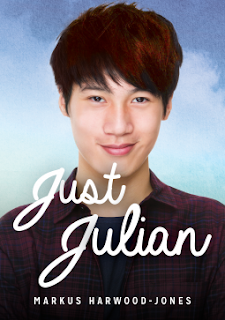 A young gay man finds the courage to stand up for himself in an LGBTQ twist on Romeo and Juliet.
After years of bullying at school, 19-year-old Julian is depressed. He sees a glimmer of hope after meeting the similarly out-of-place Romeo at a party and sharing a kiss with him. The only problem: Romeo has always identified as straight and he hangs out with a group of intolerant guys. But as the two begin to fall in love, Julian finds strength he never knew he had. When Romeo's old friends come after the couple, a vicious fight puts both Julian and Romeo in the hospital. The two boys decide to take a stand for their right for respect.
Just Julian provides insight into the struggle against homophobia, reminding LGBTQ readers that they are not alone.
*Please note that this is a hi/lo title intended for reluctant and struggling readers. As such it is fast-paced, short, and uses high interest content with simple vocabulary to keep these readers engaged.

Just Julian is a refreshing Young Adult book by Markus Harwood-Jones.
Set among the premise of Romeo and Juliet, this story tackles the affects of bullying, many of the struggles of young gay and lesbian people, unrequited love, as well as having transgender and gender-fluid characters.
Julian left school after the bullying got too bad. After trying to kill himself, still depressed, he isolated himself and avoided his friends. Now he's just trying to survive the worst of his depression, feeling like he's one small slip from falling back into the deep depression again.
Forcing himself to face his friends, he meets Romeo at a party and is unable to forget about their kiss.
Romeo, meanwhile, is firmly hiding in the closet while he runs around with the homophobic bullies. Julian likes the Romeo that he gets to see, but struggles with Romeo's inability to do the right thing.
In the end, Julian's feelings about living change and he's happy to be alive. And, hopefully, he can help others who have been bullied.
In Just Julian, Markus Harwood-Jones has created a wonderful tale that should be read by all teens. Bullies need to learn the true harm they do to others, and they need to learn to tolerate people who are different from them. And for those who are being bullied and feel so different and useless, there is a great message in this story.