Jude has a tender heart. Yet he was born into a criminal empire and groomed from childhood to step into his father’s violent footsteps. To survive, he created a second personality. Ras is everything Jude isn’t—cruel, remorseless, and utterly without fear, as incapable of love as Jude is of malice.

But when Ras meets a ruthless socialite, he begins to feel a strange stirring of emotion, a brush of Jude’s passion against his own dark heart. Meanwhile, Jude finds himself with a knife in his
hand, the evil in Ras’s soul bleeding into his own.

As the walls between them crumble, they could lose everything—their lovers, their family, and their hold on the dark city itself.

Coming together could break them…or make them whole.

1: Jack of Spades
Around me, the hallway is silent. No soft brushes of footsteps on the dark green carpet, no huff of breath, no rustle of clothing. But a fragment of a second before he strikes, I know he’s there.

I raise my hand, grazing my fingers over a thin metal wire but failing to stop it from circling my neck. My attacker jerks my head toward him with the noose, the cold wire digging into my skin.
Like any trained Special Forces soldier, he’s turned his back to mine, intending to yank me over his shoulder like a duffel bag and strangle me with my own weight. I have only a single second before my feet leave the ground, and I use it well, launching myself into the air. I backflip over him, turning
through the still, stale air to land on cat feet facing him. The wire, made long to give better leverage, loosens enough for me to pull it over my head.

I throw a kick, a downward thrust toward his knee. Graceful as always, he steps easily aside. He answers it with a quick punch, fist flying toward my jaw, but my arm is already there, deflecting the
blow harmlessly away.

I barely dodge another jab, a decoy strike before he grabs my arm, twisting it behind me and pushing me up against the wall. A picturesque landscape in a gilt frame crashes to the floor by my feet.

He jerks the captive limb once and pain shoots up and down my arm like sharp splinters of bamboo. He’s always believed pain to be an excellent teacher, so it’s become a frequent companion.

When he releases me, I turn to face him, shrugging my right arm a few times to work the pins and needles out.

“You heard me,” he says, approval softening his stern features, the crooked nose—broken three times over his forty-five years—the steely line of his mouth, the sharp angle to his jaw.

“It wasn’t exactly that, sir,” I say. “It was more like I sensed you. I didn’t hear much but I knew you were there.”

“Even better. Go get something to eat. I’ll be there in a few.”

I continue down a hallway lined with dim lights encased in stained-glass sconces. Narrow latticed windows let the deep blue of twilight fall over me.

The kitchen I step into at the end of the long hall is brighter, cheery white-yellow light over dark wooden counters. My mother stands at the stove. Beside her, sausages in a cast iron skillet hiss
and spit.

“It smells good,” I say. On rare nights, Mom lets the housekeeper go home early and cooks something herself—the rich, salty flavors of her homeland.

“Hello, Jude,” she says in her faint voice, delicate as a flower’s petal and rarely louder than a murmur. Her soft smile fades as she walks toward me and runs a gentle finger across my neck
where there must be a red line from the garrote. “Your father needs to be more careful.”

“My father knows what he’s doing.” I trust him, and I don’t want her to talk like that when he might overhear.

She sighs, turning back to the stove as my brother Eli walks in. He’s wearing his date-night clothes, groomed and stylish as someone on a magazine. He hates to hear how alike we look, but we do
both have thick black hair, a striking contrast to our pale skin, and the same high cheekbones.

We take after our mother, who looks a little like Snow White, gazing wistfully out into the dark gardens. They’re January-dead right now, brown and crumbling, but flourish in the summers; rows
and rows of blushing rosebushes, a pale cobblestone path laced between.

“Mom.” Eli puts his hands on her shoulders and says something in Russian.

She turns to face him with a smile, responding in kind. I listen to their murmured words, but only understand a few. I wasn’t allowed to speak Mom’s native language since we came to the city,
and somehow I’ve managed to forget almost everything I knew. It means Mom is close to Eli in a way she can’t be with me. She reaches up to pat him gently on the cheek, affectionate as always.

While they talk, I get a beer out of the fridge for him so he’ll have to look at me for at least a few seconds. His hostile green-eyed gaze doesn’t linger as he takes the cold bottle from me.

“I thought we could take the horses out tomorrow,” I say.

“But you haven’t ridden Sun in months.”

He glances at the stove, but Mom has stepped out of the kitchen. “Fuck off, Jude. I’m busy.” He turns and walks to the table. I follow and he sighs, setting his beer on the wooden surface with a clunk.

“Do you always have to look at me like that?” he says.

I cross my arms, as though I could block his stinging words and hide the part of me that feels just like a puppy he kicked into cold water.

“You’re an asshole,” I say. “I just wanted to spend time with you.”

“You want to step into the gym and say that?” He walks toward me, an intimidating frown on his face, taking full advantage of the six inches he has on me, his bulky frame. By now, I’ve given
up the hope I’ll ever be as big or as strong as he is. But I’m faster, darting like quicksilver, elusive as water when we spar. As we’ve grown up, I’ve become his equal.

“Fucking waste of my time.” He steps away and turns back to the table. It’s my victory, but I don’t feel any triumph, just the usual weary guilt.

Mom sighs, standing in the doorway. She doesn’t say a word, so used to our fighting she only tries to stop us if we’re actually hitting each other. I should be more careful to keep it from her.

Dad comes in. He catches my eye with a warm, proud smile that makes me feel a little better. My mother turns her face up toward him, and he kisses her on the cheek. Her features are angular but
beautiful, her slender neck clad in a gray turtleneck that doesn’t quite cover the bruise at the base of her jaw. Dad must have been drinking last night. He doesn’t mean to hurt her, but he can’t always help himself. I should have been here to stop him.

She gives him a timid smile. “For you, Vance. Mama used to make it when you visited us. You remember?”

Mom puts plates on the table in the breakfast nook, a small alcove surrounded by tall windows edged with lacy curtains. They let the darkness encroach on us, stars absent in the overcast sky.

“Do you have plans for tonight?” Dad asks. Eli and I both know he’s talking only to me, Eli beneath his notice as always.

“Brienne’s throwing a party,” I say.

“Oh, Jude,” Mom murmurs. “Shouldn’t you stay and study? Have you studied one time since you were suspended?”

“That’s right,” Dad says. “You’re back to school on Monday. Fucking shame. I had something pretty interesting planned.”

“I don’t have to go.” I’d much rather work with Dad, like I’ve been doing since I was thirteen. Now that I’m eighteen, I’m an expert in everything from smuggling illegal drugs to running protection rackets.

“You do have to go,” Dad says. “I had to pull a lot of strings to get them to take you back, so don’t fuck it up again, hear me?” A cold, steely wire is threaded through his words, and I know I’ll
have to be careful.

“I don’t know why you care,” Eli says. “Jude doesn’t learn anything. He doesn’t even try. When I was—”

“He’s learning plenty,” Dad says, talking over Eli as usual. “You’re not there to learn calculus or some shit. You’re there because that’s where the mayor and city councilmen and CEOs of
major corporations send their kids. When they run this city, you’ll be glad you know their names.”

Dad chuckles. “Don’t get cocky. But I do have the feeling that someday soon, we’ll be able to do a lot of expanding.” He stands. “You can’t go to the party tonight. I need you boys with me. We have
work to do.” 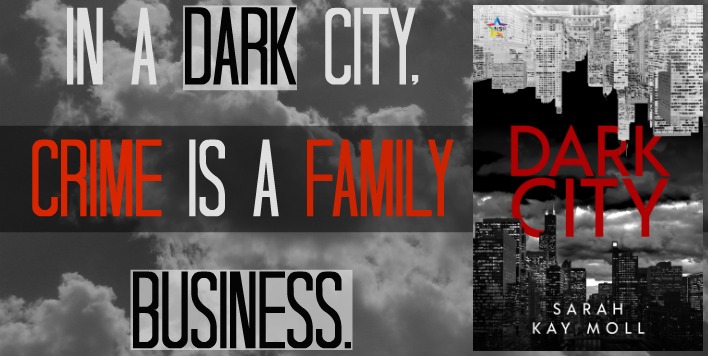 Sarah Kay Moll is a wordsmith and an amateur homemaker. She’s good with metaphors and bad with coffee stains, both of which result from a writing habit she hasn’t been able to quit. She lives a
mostly solitary life, and as a result, might never say the right thing at parties. She’s passionate about books, and has about five hundred on her to-read pile. When she does go out, it’s probably to the library, the theater, or the non-profit where she volunteers.

Sarah lives in a beautiful corner of western Oregon where the trees are still changing color at the end of November and the mornings are misty and mysterious. She spends her free time playing
video games and catering to her cat’s every whim.