From A Jack To A King by Scotty Cade 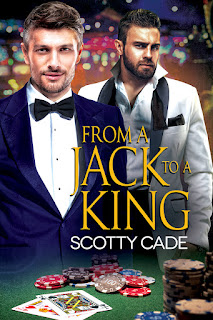 
BLURB
New York Times best-selling mystery writer Bay Whitman leads the life of a celebrity—at least on the surface. In public he’s self-assured and in control. Women hang on his every word, while men envy his confidence and swagger. But in reality, Bay is a loner. He’s shy and introverted, and his life consists of sitting in a dimly lit room writing his famous Jack Robbins mystery novels. His one vice—gambling. Winning an escort in a poker game will change Bay’s life in ways he never imagined.
Matthew “King” Slater is one of the hottest tickets in gay porn. He spends his days in front of the camera and his nights as a highly paid escort to the rich and famous. Deep down, he craves romance and a real connection, but his past makes it hard to separate the needs of his body from those of his heart. For now, it’s easier to think of sex as just a job. But while doing a shoot in Vegas, King is hired for a tryst at a famous hotel and casino, and his handsome client might blur the line between work and play.
REVIEW - 5 Stars!
Going into From a Jack to a King, I wasn’t sure what to expect as this is my first time reading one of Scotty Cade’s books. And what a fantastic surprise it turned out to be. It is loaded with so much material and takes you on an emotional journey.
Bay is a famous author, and a recluse. He is shy, insecure and a completely non-social introvert. When Bay first created his character Jack Robbins, he made Jack into the man he wished he could be. Now that Jack is famous, and Bay has to deal with fans, he takes on Jack’s character to hide behind a “mask.” Even though he can appear to be confident and worthy of respect, Jack is not the true Bay.
King is a porn star and an escort. When Bay wins King’s services in a poker game, he knows he isn’t the type to use an escort. Heck, Bay can’t even remember the last time he had sex. It has never been a big part of his life. Then he sees King in his hotel doorway, and is absolutely amazed and in shock. Yes, the man is beautiful, but also King completely resembles the character of Jack.
King is everything Bay has always wanted to be. He appears to have a ton of confidence, and he is handsome, witty, sexy and charming. Of course, the fact that he finds King sexy confuses him. He has never noticed guys before.
Bay doesn’t tell King he resembles Jack, an imaginary character. By deciding to use King as further inspiration for Jack, Bay puts King in an awkward position for a multitude of reasons. King is unprepared when Bay’s fans recognize him as Jack.
When King realizes Bay doesn’t want to have sex with him, he feels slighted. He is used to people paying big bucks for him. Meanwhile, Bay becomes more and more confused about his attraction to King and isn’t sure if he wants to be with King, but knows he wants them to be friends. Here is where the real story begins.
A prominent theme in From a Jack to a King is the effect bullying can have on people. Bay sees himself as the awkward, persecuted school kid called “Bayfairy.” This part is extremely well developed and well written. It is heartbreaking to see the real-life effects bullying can have on people. Scotty Cade does a fantastic job of entwining this issue into every part of Bay’s life.
Another brilliant theme is sex addiction. We learn King’s history with sex, what lead him to his addiction, his recovery efforts, and why he is okay with being a sex addict who has sex for money. This part is so damn touching as the author weaves the information into the story. It definitely makes King the complex man he is today.
These two men may appear to have nothing in common, but in fact share a lot. They are both completely dysfunctional, totally insecure, and use a created persona to hide their true selves from the world. By doing so, both men appear self-assured and confident. As time goes on, and they open up more to each other, their relationship slowly develops and helps them to get through their issues.
Bay and King should resonate with readers very well. I am elated to have discovered Cade’s work and can guarantee I will be reading more by him. If you are looking for a deep, complicated story, I highly recommend From a Jack to a King. It is a journey of two survivors finding strength and love in one another. Scotty Cade couldn’t have done any better.