His Dirty Secret by Adian Bates 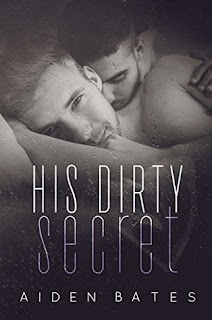 ANTHONY I never thought I was the guy who loses his head when someone tall, dark and dangerous looks my way. Who’d risk everything for a taste of something that’s never as good as it seems. It only takes one night with my best friend’s brother to change that. The secrecy is what drew me in, not the way my skin tingled from the moment I lay eyes on him. No, it was intrigue that led me to seek out the eldest Roscoe prince, the mysterious black sheep of the family. Where had he been until now? Why did scandalized whispers follow him into every room? What sins in his past had even my best friend wanting nothing to do with him? I don’t know if he’s as dangerous as everyone claims. I don’t know why I’m the only one who thinks there might be more to him than this darkness everyone else sees. All I know is I can’t stop looking for proof I’m right…because I’m already in way too deep. RYAN I thought prison had prepared me for this. The stares, the cold shoulders, the contempt…but it doesn’t matter. I can’t take back what I’ve done. I’m not sure I would, even if I could. There’s only one shining light in the darkness, a brightness I can’t look away from, no matter how many people warn me I should. Anthony, my little brother’s best friend. They say I’ll only hurt him too, and they’re not wrong. Yet every time he shows up at my door, I can’t help but let him in. I don’t know why he believes I’m worth it, what he sees that nobody else does. I just know that I need it. Crave it. Crave him. And when a one-night stand leads to unexpected consequences, when he finally starts to listen to them and pull away…all I know is I’ll do anything to stop it. I don’t know how he convinced me I could be the man he deserves, but he did. I can. And I’ll do anything to prove it. This book is 55,000 words of American royalty and their dirty family secrets, mpreg and a brooding ex-con’s love child, not to mention blackmail, bar brawls and secrets that refuse to stay buried. Come for the sex and scandal, stay for the sweetness….but only if you’re over eighteen!

His Dirty Secret, by Aidan Bates is a unique twist on the best friend's brother romance.

When Ryan returns home to wish his brother Jamie a Happy Birthday, he hooks up with Jamie's friend, Anthony. As Ryan is intrigued by Anthony, he ends up changing his plans and staying in town.

Ryan, back in town after spending time in jail, trying to protect someone else, is considered the loser of the family. As Anthony starts learning about Ryan via Jamie and others, he is warned away from Ryan, being told that anything he touches ends up destroyed.  Everything Anthony hears is so contradictory from the man he spent the night with, leaving Anthony confused.

Ryan is extremely misunderstood, and has been shunned by his family. One can't help but to route for him to find joy and love, as well as prove his family wrong. Anthony may just be the one who can help him, just by showing him that someone cares about him.

This story is a compelling story full of strong attraction, family drama, secrets, threats and some sweet romance. I was sucked in from the first page and couldn't put His Dirty Secret down.