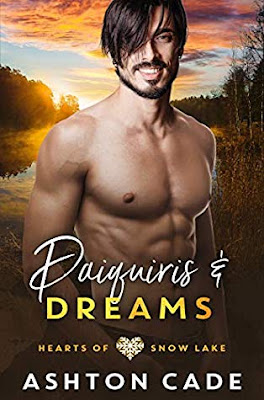 Taylor: Pretty much everyone in my life has teased me about my crush on the boss at this point. I figured Noah knew and was just saving me some embarrassment by playing dumb. Hard to believe an astute guy like him could be so clueless, but I’ve heard crazier things, I guess. Since the accident, he's just in shock. He’s always been a man of few words, which I've chalked up to him being ex-military, but this is on another level. This is a man shutting down, and I’m trying my best to keep him from slipping under the surface. It’s not like I have any comforting words to offer⁠—there’s not much of a bright side here. No silver lining to losing your brother and sister-in-law in a horrific bus accident. His little niece Bailey’s alive, but babies are so fragile, so unpredictable. Who's going to take care of her? And who's going to take care of Noah? I guess I'll step up. But ... who's going to take care of me? Noah: After a long day tending bar, it’s really nice to come home to a friendly face. Nicer than I really want to admit. And it’s not just any friendly face, it’s Taylor. The guy that’s way too young for me. Way too sweet for me too. Ever since the accident, he's been more amazing than I could ever dream. Even though I don't know what I would do without him, I have to think of his welfare. I just know it’s better for him if I keep my distance, don’t get involved. I’m a cranky old son of a bitch with too much baggage for someone with an uncomplicated life like his. I’ve never had anyone other than my brother, and to be honest, I wasn’t always great at being there for him. First chance I got I joined the Army to get away from the bullshit of our life, leaving him to figure out his own way. I don’t deserve to even be having thoughts about a guy like Taylor, a guy with such a big heart. The kind of guy that sees a curmudgeon like me and thinks there’s something worth saving.


Ashton Cade's Daiquiris and Dreams, the seventh book in the Hearts of Snow Lake is an emotionally riveting story.


Noah's haunted by his past, drowning in grief as well as pain from his PTSD. Taylor, who's long crushed on his boss Noah, suddenly finds himself hired to be his manny. I love the way their story starts. It's emotional, full of pain and grief, yet firmly sets the stage for this wonderful boss/employee romance. Taylor is super sweet and sensitive, and I love the ways in which Taylor helps to bring Noah back to life.

As for Bailey, well, if you like babies, you will love her. She is the cutest and I absolutely adore her.

This is a story of surviving one's grief, fears, and doubts. It's a story of finding love through pain and loss.

The outside forces that cause angst is probably a little forced for some people. For me, I enjoyed it a lot and just went with it. It's definitely emotional, both scary and creepy.

I enjoy the sooth writing, the intriguing characters, and the well developed storyline. There is fantastic character growth for both men and a whole lot of romance. It's written in first person, present tense, which I usually hate, but I didn't even notice it until well into the book.

Overall, Daiquiris and Dreams is a splendid romance. The entire Hearts of Snow Lake series is captivating. If you love small towns, these books are a must read.