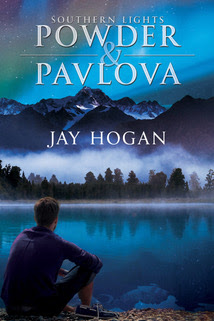 ETHAN SHARPE is living every young Kiwi’s dream—seeing the world for a couple of years while deciding what to do with his life. Then he gets a call.
Two days later he’s back in New Zealand. Six months later his mother is dead, his fifteen-year-old brother is going off the rails and the café he’s inherited is failing. His life is a hot mess and the last thing he needs is another complication—like the man who just walked into his café,
a much older…
sinfully hot…
EPIC complication.

TANNER CARPENTER’s time in Queenstown has an expiration date. He has a new branch of his business to get up and running, exorcise a few personal demons while he’s at it, and then head back to Auckland to get on with his life. He isn’t looking for a relationship especially with someone fifteen years his junior, but Ethan is gorgeous, troubled and in need of a friend. Tanner could be that for Ethan, right? He could brighten Ethan’s day for a while, help him out, maybe even offer some… stress relief, no strings attached.

It was a good plan, until it wasn’t.

Jay Hogan's Powder and Pavlova, the first book in the Southern Lights series, is wonderful.

Tanner and Ethan, two men who belong together, have bad timing and conflicting circumstances. Hooked immediately, I love and adore these two men who must choose between love and responsibilities. The emotions left me gutted at times. Both men have realistic and dynamic.

What starts as a temporary arrangement, soon turns into more for these two men who are great together. What follows is a riveting tale full of heat, humor, conflict, and romance. I absolutely love these men as a couple. Their connection is undeniable and their chemistry is sizzling.

Tanner oozes success as he's trying to move forward with his life. His future is elsewhere, yet he can't resist spending as much time as possible with the gorgeous Ethan. Ethan, a café owner, is much younger than the handsome Tanner, but he looks even younger than he is. His responsibilities are his main focus, as he is raising his younger brother.

And then we have the secondary characters. Ethan and his group of friends are fantastic, adding a whole lot of warmth to this story.

The writing is amazing, with compelling and intriguing characters who are well developed and fully come alive. There's superb dialogue, and the storyline is impressive and thoughtful.

Powder & Pavlova is a long and wonderful romance. Jay Hogan impresses in this emotions and steamy romance between two men trying to find their place in this world after some life changing set-backs. 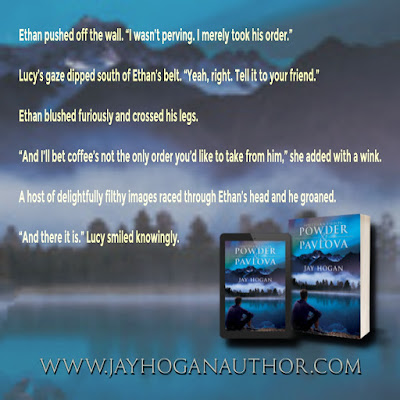 Safe from those heather grey eyes, Ethan collapsed against the door and tried to calm his thundering heart. What. The. Ever-loving. Fuck. He checked his forehead for the tell-tale loser sign he was sure he’d find carved there. Nope, just a shit-ton of nervous perspiration.
“Mister hot and heavy is in again, I take it?” Lucy smiled from the other side of the stainless prep bench, her hands white with flour.
“I have no idea who you’re talking about.” Ethan wiped his hands on his jeans and rearranged the order forms stacked on the desk.
She snorted in disgust. “You can’t lie for shit Ethan, I don’t know why you bother.”
“You’re being ridiculous,” Ethan scoffed. “The guy’s gotta be close to forty.” Just how I like them… apparently.
She looked up from measuring the dry goods. “Well, he’s damn hot.”
“I hadn’t noticed.” He collated the pencils according to colour.
“Liar.”
He threw the last of the pencils in the caddy and fell back against the door. “That obvious, huh?”
Lucy’s grin split her face. “Like a whore in a convent.”
He snorted. “There’s an image I didn’t need.”
Lucy reached for the huge sieve and worked her way through a second mound of flour. “So, what are you doing in here?”
“Hiding?”
“Well, get back out there, mister. He’ll be gone in a minute. You wouldn’t want to miss a final perv.”
Ethan pushed off the wall. “I wasn’t perving. I merely took his order.”
Lucy’s gaze dipped south of Ethan’s belt. “Yeah, right. Tell it to your friend.”
Ethan blushed furiously and crossed his legs.
“And I’ll bet coffee’s not the only order you’d like to take from him,” she added with a wink.
A host of delightfully filthy images raced through Ethan’s head and he groaned.
“And there it is.” Lucy smiled knowingly.
“Oh. My. God. What is it with you lot?” Ethan grumbled, mortified at how badly he’d been caught out. He tugged his shirt a mite lower and flipped her off. “You’re lucky I love you, bitch.”
“You’re lucky I let you, arsehole.”
He pushed open the door and ambled back into the café. Nothing to see here folks. The effort at nonchalance was ruined the second he laid eyes on mister tall, dark and fucking combustible, when he caught his foot in the stool he’d vacated earlier and tripped. Arms wind milling, he stumbled almost to his knees at the man’s feet. Really Ethan? Really? Yeah, not one of his better Kodak moments.
He glanced up in time to see the guy bite back a laugh, but refused to linger on that whole teeth on lip action. If there was a prize for most humiliating crush on an ‘almost’ silver fox, he’d win it hands down. 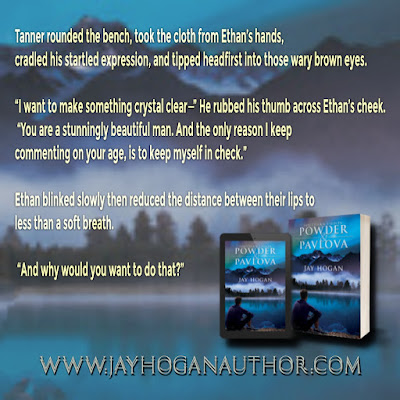 I am a New Zealand author writing in m/m romance, and romantic suspense. I have traveled extensively and lived in the US, Canada, France, Australia and South Korea. In a past life I have been an Intensive Care Nurse, Counselor, and a Nursing Lecturer.
I'm a cat aficionado especially of Maine Coons, and an avid dog lover (but don’t tell the cat). I love to cook, pretty damn good, love to sing, pretty damn average, and as for loving full-time writing, absolutely… depending of course on the day, the word count, the deadline, how obliging my characters are, the ambient temperature in the Western Sahara, whether Jupiter is rising, the size of the ozone hole over New Zealand and how much coffee I've had.
Welcome to my world. 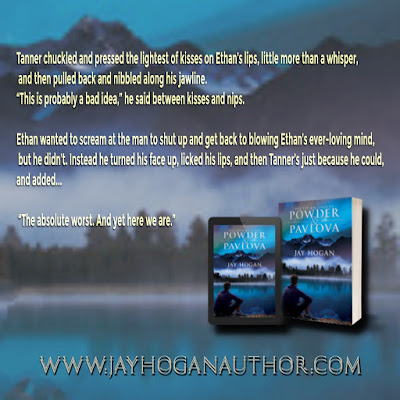