The Traitor and the Fighter (Seeking Asylum #2) by Alice Winters 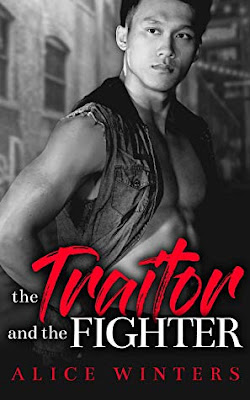 Kai
I’d sworn I’d never be part of the Chromes gang again or let Sawyer, their leader, control me once more. Yet an impossible choice has me returning to the crime-ridden city of Asylum, where I’m faced with James, the man I was hoping never to see again.

I’ve always thought that James was nothing more than a mindless fighter that Sawyer controls, but then why am I drawn to him? Why is it as we spend more time with each other that I start to realize there are hidden depths to the man behind that cold facade he wears? I know I need to stay focused, do my job, and get out of Asylum, but I can’t leave James behind. And how can I manage to do any of that when Sawyer is breathing down our necks? One simple mistake would be enough to ruin the bond that has started to form between us.

James
I’ve given up on looking for a better life and become resigned to doing what Sawyer asks, but the hatred I feel for the man is beginning to overflow. When Kai returns, I’m initially filled with disbelief. He had it all, and when he had a chance to stay away, he came back. At first, I find myself irritated by his presence, but maybe that isn’t the only emotion I’m feeling when he’s around.

For the first time in my life, there’s someone who cares about me—someone who will notice if I’m gone—and it makes me want to fight harder than I’ve ever fought before. It makes me want to protect him from the sickness of this city. And before long, I realize that I’ll do anything for this man I once disliked. Because I’ve found someone to love and Sawyer isn’t going to take that away from me.

Please use the “look inside” feature to see trigger warnings.


Alice Winter's The Traitor and the Fighter is great addition to her Seeking Asylum series. Be sure to read book one, The Sinner and the Liar first.

Kai and James live in a world where finding love isn't a viable option. But when Kai's sent back into the ugly world he left behind, all in an attempt to save his sister, their worlds collide. They both have feelings that never went away, and they're full of anger and hate towards one another.


It's a fascinating read as falling in love isn't an easy thing to do in the dangerous world they live in. Lies are told, and hiding is necessary, as Kai is working undercover. The city is ruled by Sawyer's gang, leading to a great mix of action, danger, and tough choices.

The author expertly weaves this dark, suspenseful tale with romance and humor. It includes some hot hate sex, and the action is well done, full of danger, but never overly scary. Not the typical laugh every second that we're used to with this author, but there are still plenty of laughs and innuendoes.

Damn, Alice Winters does it again. The Traitor and the Fighter is a riveting tale of finding that perfect partner, the one who ends up saving you. It's fantastic action story mixed with danger and plenty of sex and romance. It has a superb writing style, with a multi layered plot, great dialogue, and plenty of banter and snark. Basically, Alice is a must read for me, as she never lets me down.