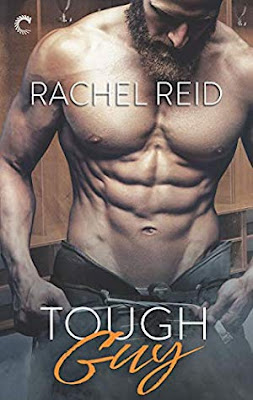 They have nothing in common—so why does Ryan feel most like himself whenever he’s with Fabian?Pro hockey star Ryan Price may be an enforcer, but off the ice he struggles with anxiety. Recently traded to the Toronto Guardians, he’s determined to make a fresh start in the city’s dynamic LGBTQ Village. The last thing he expects to stumble upon in his new neighborhood is a blast from his past in the fabulous form of Fabian Salah.Aspiring musician Fabian loathes hockey. But that doesn’t stop him from being attracted to a certain burly, ginger-bearded defenseman. He hasn’t forgotten the kiss they almost shared back in high school, and it’s clear the chemistry between them has only intensified.Fabian is more than happy to be Ryan’s guide to the gay scene in Toronto. Between dance clubs and art exhibits—and the most amazing sex—Ryan’s starting to feel something he hasn’t experienced in a long time: joy. But playing the role of the heavy on the ice has taken its toll on his body and mind, and a future with Fabian may mean hanging up his skates for good.

A second chance romance, Ryan and Fabio reunite after 14 years ago, back when Fabio's family housed Ryan for a while.

Ryan's a quietly out gay hockey player, but he definitely hides that he is attracted to femme men, as the androgynous look is what turns him on.
",,he was in awe of their confidence, of their bravery to openly be themselves and dare anyone to say anything about it." I  freakin love this!

Ryan's a multi-layered character, as he may be a big, bad hockey enforcer but he's terrified of flying. He struggles to get along with his teammates wherever he goes, as he has shockingly low self-esteem. He suffers from anxiety, including social anxiety and anxiety about sex. His attitude towards sex is well explored and made my heart hurt. The poor man feels unworthy of sex, which is heart-breaking. It's realistic and well written. I love this man and just want to wrap him up in a big hug.

And dear sweet Fabio. He's a femme musician who wears makeup. Basically, he's exactly the type of man Ryan's attracted to. Following along as they reuinite and develop their relationship, is a marvelous read. But best of all, I want to cry that Fabio isn't afraid of Ryan. It's beautiful, absolutely beautiful.

I love Rachel Reid's writing style. The writing is great, with compelling characters, and a riveting storyline. The anxiety aspect is extremely well written, with both care and compassion.

Tough Guy is a must read for any fan of hockey romances. This Rachel Reid book will not disappoint.