Snow Way Out (Snowed In - Valentine's Inc. #7) by Nora Phoenix 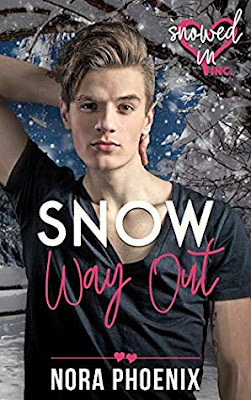 He's twice his size and a lot older, but will Mac let Quentin come out on top?Quentin is searching for…something. Respect.Answers.His identity.Most of all, he’s searching for a man who will let him be in charge, despite the fact that he looks like an elf. But all that will have to wait because right now, he’s searching for shelter after getting stranded in the middle of nowhere, New York with a massive snow storm about to hit. He finds an unexpected host in Mac, a man the whole town seems to hate. Mac has secrets…but so does Quentin.Sparks fly between them, but can it lead to more when Mac is twice his size, a lot older, and practically a virgin… and when Mac can’t leave and there’s no way Quentin will stay?Snow Way Out is a steamy contemporary gay romance with an age gap, a dash of kink, a ton of snow, a gentle giant of a man, and a bossy twink. It’s a standalone book in the Snowed In – Valentine’s Inc. series, which are only connected by the same writing prompt.

Snow Way Out, Nora Phoenix's contribution to the multi-author series Snowed In - Valentine's Inc, is a delightful read.

Mac's a sympathetic character, a man who the town resents and avoids due to his stutter and some anger towards his family. He's suffered many losses, is an ex convict, and has no one to turn to.

Quinten ignores the stutter and actually wants to talk to him. Quentin is the person we all want in our life, supportive, understanding, and caring. He's amazing. I enjoy that he looks badass, but it anything but.

Together, they are wonderful. It's beautiful that Quentin calms Mac, giving him hope for a future. Reading about Mac's sexual discoveries is fantastic, completely intriguing.

A mix of forced proximity, age gap, and first times. The men experiment with bondage, in addition to all the other sexual firsts for Mac. And damn, there is plenty of steamy moments. And making things even better is the size difference between the two men.

Snow Way Out is an entertaining hurt/comfort romance.  A completely feel good read, you can't go wrong with this Nora Phoenix story.