Before the Call: A Small Town Hearts Novel by Emma Alcott 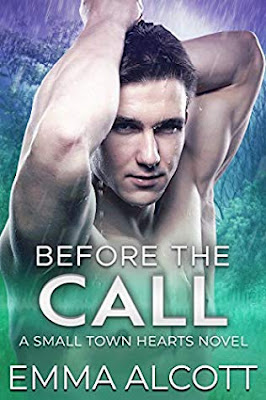 Rule #1 Don’t fall for the ridiculously hot straight guy Rule #2 Especially not if he’s your best friend Rule #3 Extra-especially not when you’re supposed to be his private tutor Rule #4 Oh, god, but those eyes Rule #5 Okay, maybe eyes are fine if you don’t look south Rule #6 Don’t look south Rule #7 You looked south, didn’t you? Rule #8 Are you even listening? Gabe Mitchell isn’t listening. What’s worse, ever since he moved back to the small town he thought he’d left for good, he’s turned into a habitual rule breaker. Falling for his straight best friend, Clark Summers? Check. Falling for his straight best friend, Clark Summers, who also happens to be his newest mature student? Check. And don’t you dare get him started about what’s going on down south, because Gabe doesn’t need to check that to know he’s in deep. It’s a good thing Clark’s missed him these last four years, and a better thing that he’s willing to do whatever it takes to have Gabe back in his life, because rules are about to be broken. All of them. And Clark’s only rule? The one about being straight? It might just end up broken, too. Before the Call is the second book in the Small Town Hearts series, which features heroes scattered across the rural United States who find love where they’re least expecting it. In addition to friendship that turns red-hot, you can expect to find generous servings of vanilla ice cream that are anything but vanilla, interesting “tutoring” techniques, a nerd who’s head over heels for the best friend he can’t have, and a jock who loves his Dork even after years apart.


Wow, Before the Call is another impressive book by Emma Alcott.

A small town romance, it's a beautiful story where long held secret feelings are slowly realized. A combination of best friends, friends to lovers, jock/nerd, and small town, this book has a lot of emotion.


Gabe and Clark have been apart for four years, with the years of separation not treating them well. It took me a while to understand the way everyone's connected, but when it's all unveiled, it's great.


Gabe is back in town as a last resort. Growing up gay in a small town has shaped his character and his pain. Meanwhile Clark has always remained in town, helping to raise his siblings. Both the men and their stories are multi-layered. And it's absolutely riveting.

Their story is one of re-evaluating oneself; trying to figure out who they really are. It's full of confusion, homophobia, and a whole lot of family issues. And it's full of beautiful and tender first times, as Clark has never been with a man before.


The writing is stellar, with a multi-layered and fluid storyline. The author is a master of written dialogue. Written with alternating povs, the characters are well developed, fully coming alive. The small town love and support, as well as the quick manner in which rumors fly, is well alive and represented.

I love Before The Call. I love both men, and I absolutely adore the ending. This Emma Alcott read is a sweet, feel good story that will not disappoint.