The Secret Thing (The Blackburn Brothers Duet #2) by E.M. Denning 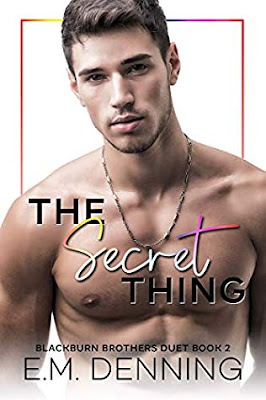 On the cusp of starting college, Christian Blackburn has had enough of his meddling, helicopter mother. He lucks into a room in a gorgeous house close to campus and away from the noise of dorm living. His landlord, Brandon, is a surprise. It doesn’t matter to Christian that Brandon is twice his age. He’s good looking, kind, a hell of a cook, and he doesn’t treat Christian any different because of his seizures.


If only Brandon wanted him back.
Brandon Hayes is comfortably divorced, but his life would be better if well-meaning people kept their nose out of his affairs. To ease his ex-wife’s concern that he’s living in a house far too big for just one person, he takes on a roommate.
The much younger Christian is smart and charming. He’s older than his years, and his presence in Brandon’s life wakes something up inside he’s kept hidden from everyone. Having Christian around reminds Brandon of his attraction to men, a pull he can’t ignore.
One kiss changes everything.
Their chemistry is off the charts and their lives fit together in a way they never expect them to. Battling the age difference, a nosy parent, and the fear that people won’t accept them as a couple, they agree to keep their relationship secret. After a tumultuous weekend away, Christian decides that he wants Brandon by his side, and doesn’t care who knows about them. But what will happen once all Brandon’s secrets are out in the open?

EM Denning's The Secret Thing, the second book in The Blackburn Brothers Duet series, is a fantastic May to December romance.

Christian's a young college student who's desperate to be treated as an adult. After a lifetime of dealing with his overly protective mother, he wants to find his own way. Enter the man who offers to rent him a room in his house. Brandon's a man twice Christian's age who feels like his years of denial and fear have led him to be fake. Even Brandon doesn't know who he really is. Exploring his bisexual side for the first time sees him coming to life.

Written in alternating 3rd person pov, the story closely follows the struggles with Christian's illness, his issues with wanting to be independent, and Brandon's exploration of his sexuality. The author excels in written dialogue, making these scenes natural and flawless. Both men are well developed. It has a predictable plot, but I loved it and found myself completely riveted.

There is a lot going on in this story. The author perfectly entwines family issues, health issues, and sexual exploration to create a hot and steamy emotional read. The health issues are tremendously written, illustrating living with seizures, without ever feeling like a lesson. But most of all, I fell in love with both men as they have very different backgrounds, yet both lack the freedom to be themselves. I enjoy the way they have this similar struggle and the way the author brings it all together.

The Secret Things is hot and emotional as these two men explore a new and exciting time for both of them. This EM Denning read is more than just a romance, as both characters are discovering who they are for the first time in their lives. It's emotional and had me staying up late into the night to finish it.