If Wishes Were Horses by Silvia Violet 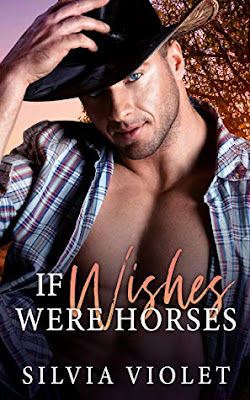 Ken gave up his society life to run a ranch, and he’ll do anything to protect what’s his. When he starts to suspect his new employee is hiding something, he knows he should send the man away. But Andy is as gorgeous as he is infuriating, and he‘s pulling Ken to him like a magnet. Both men long for control, yet neither knows how to surrender.

A clash of wills is inevitable, but neither man expects the tenderness that grows every time they touch. With secrets between them and outside forces threatening the ranch, each man will need to decide how far he’s willing to go to protect the other.
Review
My Rating - 4 Stars!

Silvia Violet's If Wishes Were Horses is a decent suspenseful/action romance.

From the start, I became intrigued by Ken's decision to leave his company and family behind. This quick glimpse into his personality makes him immediately likable. Fast forward and he owns a ranch, having left his old life firmly in the past.

Andy's an undercover cop who's working on Ken's farm while trying to make a drug bust. The two get off to a good start, full of banter and snark. And lots of flirting. They are full of quick wit and some hot tension. But, as much as they liked one another instantly, it took me a lot longer to feel their connection. Why? Because it's all angry sex and push and pull. The lack of trust they have for each other, and the secrets between them firmly keep them at a distance emotionally.


Both men are well developed individually. The reader fully understands their emotions and their backstory, both of which drives this plot. Their story is full of danger and suspense, as well as hot sex and domination. I love their physical connection, but the emotional connection took a while to be established.

As for the action, I liked it, but it also seems a little forced. Secrets and trust issues greatly affect the way they act. I enjoy the depth of their emotions, but I still felt like things didn't always work together. I found myself confused at times, and wishing the reader knew a little more of what was going on.

Overall, If Wishes Were Horses is a decent read. Silvia Violet manages to fully draw the reader into the pain, fear, and doubts. There's plenty of action and emotion to keep one intrigued.