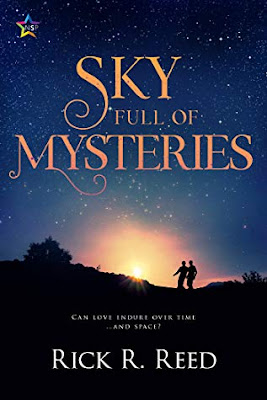 What if your first love was abducted and presumed dead—but then returned twenty years later?
That’s the dilemma Cole Weston faces. Now happily married to Tommy D’Amico, he’s suddenly thrown into a surreal world when his first love, Rory Schneidmiller, unexpectedly reappears.
Rory has no memory of those years. For him, it’s as though only a day or two has passed. He still loves Cole with the passion unique to young first love.
But Cole has so many questions: where has Rory been and what happened to him two decades ago when he disappeared without a trace? He has never forgotten Rory, but Tommy has been his rock, by his side since Rory disappeared.
Cole is forced to choose between an idealized and passionate first love and the comfort of a long-term marriage. How does one make a decision like that? The answers might lie among the stars…

I don't really know how to describe Rick Reed's Sky Full of Mysteries. It's an extremely powerful tale, painfully heart-breaking, and absolutely riveting.

It's a story of first love and the strength behind that first love. The anguish of mysterious disappearances. The fear of moving on. The continuation of holding onto hope. And pain. So much pain.

The author expertly tells this amazing tale in two parts. The first half of the book focuses on Rory, his disappearance, and the aftermath for Cole. I was hanging onto every single word.

Then Rory returns! The second half is twenty years later, with Cole now married to Tommy, and Rory suddenly reappearing.

It's a thought-provoking novel, full of mystery, faith, and love. It's gloomy and depressing, yet also lovely, full of impressive discoveries about love.

One quote that I love and everyone can relate to is "That's the thing about life, though; we were never given the courtesy of a warning when something bad was about to strike."

I can't stop wondering who had it worse. The man who can't stop loving the man from his past? The man who is suddenly back with everything being completely upended? Every character suffers as a result of this one event. The author delves into Rory's parents and Tommy, both before he was with Cole and after. There is no way of avoiding the pain and suffering, it's only a matter of handling it.

I am blown away by this story. The emotions jump off the page throughout, fully ripping the readers heart out. It's a completely no-win situation, full of absolute agony. Yet, somehow, the author beautiful manages to tie things up in an impressively satisfactory manner. The book hangover is real with this one though. I can't stop thinking about it. I am torn between loving the ending, and hating it.

Sky Full of Mystery is wonderfully written, spectacularly engrossing, and will leave the reader wanting to talk about it. Rick Reed has penned a story that will leave you struggling throughout, never really understanding how you want things to end up. It's masterful in it's strength to completely engross the reader throughout, as well as for days afterwards.