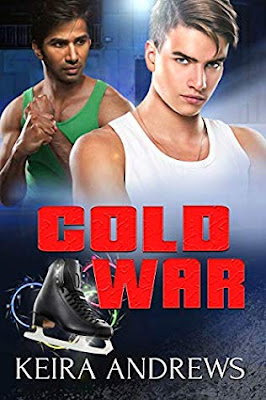 Enemies on the ice. Forbidden lovers in the locker room.

American figure skater Dev despises his Russian rival. Arrogant, aloof Mikhail is like a machine on the ice—barely ever making a mistake.

He’s also sexy as hell, which makes him even more infuriating.

Dev and his pairs partner have been working their whole lives to become Olympic champions. He needs to keep his head in the game.

The very worst thing he could do is have explosive hate sex with Mikhail in the locker room after losing to him yet again before the Olympics.

But you know what would be even worse?

Discovering that under Mikhail’s icy exterior, he’s Misha. Passionate and pent-up, he eagerly drops to his knees. His sweet smile makes Dev’s heart sing, and his forbidden kisses are unbearably tempting.

But he’s falling in love.

Only one of them can stand atop the podium. To win gold, will they lose their hearts?

I first read Cold War years ago when it was published as Cold War and Holding the Edge. I loved those Kiera Andrews books then and this story is still one of my favorites. Honestly, I am downright giddy to read this again.

From the start, I fell in love with this story. Seriously, the opening scene of hate sex and then regret is thrilling. These enemies to lovers are competitors on the ice, but the sparks fly off the ice.

Their tale is emotional with plenty of heat. The way their relationship builds, all in the mist of the Olympics, is riveting. Their entire lives have been driven by the politics of their sports and countries. Seriously, the pressure put on Mikhail is horrific. Knowing this is based on realistic events is devastating.

One of my favorite parts, other than one amazingly steamy moment, is the way the teams end up interacting in the end. It's perfectly written and just endeared me to the girls.

The writing is classic Keira Andrews, full of complex and likeable characters. Told in alternating third person pov, the reader easily comes to understand and care for both men. The author does a great job exploring the difficulties of falling for the competition, as well as the highs and lows of being an athlete. She also  delves into two different heritages and ways of life, bringing these cultures alive for the reader.

Cold War is a riveting story of grabbing onto love even if it's an impossible situation. It's a story about freedom, priorities, and love. Not only is this Kiera Andrews book memorable, it's a definite re-read.