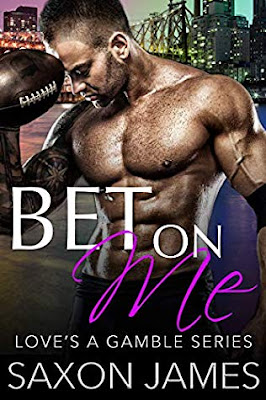 Taryn Losing a long term boyfriend to my football career highlights one thing: it’s impossible for me to have both. With only a few years left to play, I decide to throw my full focus into the game. Then I meet Elliot. The flirty texts are immediate, trusting him comes easily, and when we’re together, I’ve never experienced something so explosive. Until he drops a real bomb on me. He’s a bookie. And suddenly, being closeted is the least of my worries. Elliot I have a plan. Make a large amount of money in a short amount of time, set myself up for life, and then get the hell out of bookmaking. Good at it or not, it’s illegal, and that’s a very gray line I’d prefer not to keep crossing. Especially when I meet Taryn. He’s the first guy who’s been able to steal my focus away from my goal, and I’ll do anything to deserve him. Even quit.But the thing about illegal jobs is, they’re not always so easy to walk away from.
Taryn

Saxon James' Bet on Me, the first book in The Love's a Gamble series, is a wonderful read.

Taryn's a closeted football player which is cause enough for conflict. But soon after breaking up with his boyfriend, he meets Elliott and falls hard. Meeting the cute man has Taryn breaking all his rules, taking chances he never allowed himself to take before. That fact they fall for one another without Taryn's identity revealed just adds the entertainment. I love this part immensely and the way it is carried out.


But the real conflict is that of their jobs. Both career driven men, they are knocked on their asses when they meet. Two men who should never mix, suddenly their jobs are on the line. Commence the real fun, as angst, suspense and danger are added to the mix.

The writing is great, full of intrigue, intense chemistry, hot sex, and one hell of an emotional ride. These well developed characters are fantastic together. The dialogue is great, full of some witty banter and hot texts.

Bet On Me is a great pick when you're in the mood for a sweet romance with plenty of mystery entwined throughout. If you're a sports romance junkie like I am, this is a must read. A new to me author, Saxon James has impressed me and I look forward to reading future works.