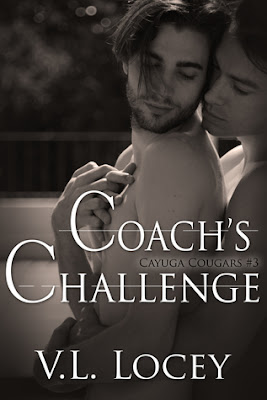 Victor Kalinski and his husband, Dan Arou, are living the dream. Married for over a year now, the couple have settled into life in Cayuga surrounded by friends, family, and a team that’s poised to make another championship run. Each man is enjoying professional success as well as personal bliss. Who knew life in the suburbs with a spouse and a child could be so darn satisfying? Not Vic. K, that’s for sure.The happy times are about to turn rough, though. The Cougars have picked up a new player, Sander March, a brash young center whose sass, skill, and attitude can rival Victor’s. When it’s revealed that this new player and Dan have history, tensions begin to rise between the newlyweds.As Victor and Dan work on those issues, the one person Victor never thought he would meet arrives in the small New York hamlet and proceeds to flip everything in Vic’s life upside down. Can Victor and Dan’s marriage withstand what life is about to drop on it, or will the challenges be too much for them to handle?

If you've read VL Locey's Point Shot Trilogy, this is a must read. More Dan and Vic!!!

Dan and Vic are married, and this one beauty starts off with some more sex. Yay! There's some good tension as an ex is in town, leading to some jealousy and doubts. And they have to deal with all his family issues, as his dad shows up.

I continue to be impressed with how the author handles Heather and Jack. She is nothing like I expected, and Jack is the cutest and sweetest kid ever.


This book, heck the entire series, is everything I love about VL Locey. The characters are deep, snarky, and full of love for one another. And there's hockey player!

In this one, the lack of understanding about bisexuality is well handled, with humor, charm, and absolute directness. In fact, the things that come out of Vic's mouth about his sexuality is fantastic, as he doesn't hold back at all. What he's thinking is what he says.

Oh, and yes, Dan and Vic continue to be super steamy together.

The writing, in alternating 1st person pov, works superbly, allowing the reader to fully understand the men and their internal issues.