The Bond-Cut Omega (Nerds Who Knot #3) by Amy Bellows 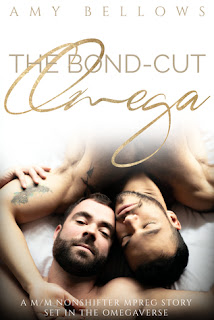 Gabe thinks he’ll never have a bond of his own. He’s bond-cut, which means his scent gland is so scarred, he can’t bond to anyone—not even his best friend, Marcus, who he’s been in love with for six years.Gabe spends every waking moment with Marcus. They co-own a tattoo parlor and share an apartment. It was Gabe who gave Marcus the vibrant bird tattoos all over his body. But Gabe never plans to tell Marcus about his feelings. Marcus deserves a bond.Marcus may be huge, even for an alpha, but everyone knows he’s a marshmallow at heart. He’s not going to pressure his bond-cut best friend into a romantic relationship he may not want. Until Gabe’s heat starts early, and a series of accidents lead to a dangerous pregnancy that exposes their true feelings for one another and rocks the foundation of their friendship.In a world where bonds are everything, can love be enough on its own?The Bond-Cut Omega is a 35,000-word best-friends-to-lovers romance with knotting, MPreg, manties, and hurt/comfort. It’s a companion book for the Nerds Who Knot Series, but it stands alone.

Amy Bellows' The Bond-Cut Omega is the third book in her Nerds Who Knot series.

Apparently as a bond cut omega, Gabe shouldn't be able to bond with an alpha.

When Marcus discovers that his best friend Gabe actually might return his feelings, he pushes Gabe for them to be together. It's a struggle to convince him of that, put an accidental pregnancy pushes things along.

Theirs is a tale of insecurities, fear, angst, and a whole lot of emotion. This friends to lovers romance isn't a quick or natural one, despite the fact that both men have love been in love with the other.

Damn, this book is hot! Gabe in heat is amazingly steamy. And some of their later scenes are just as spicy.

The Bond-Cut Omega is quick and entertaining, in addition to being a unique take on Omegaverse bonds. Amy Bellows has managed to capture all the charm of her previous books in this Nerds Who Knot series. I definitely enjoyed this book.