Mama's Boy: A Story from Our Americas by Dustin Lance Black 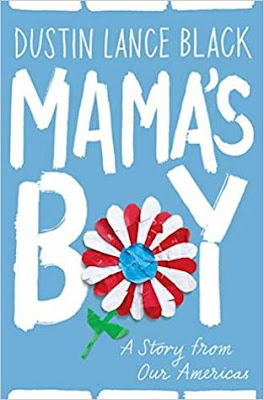 From the Academy Award-winning screenwriter and political activist, a candid, vivid, powerfully resonant memoir about growing up as a gay Mormon in Texas that is, as well, a moving tribute to the mother who taught him about surviving against all oddsDustin Lance Black wrote the Oscar-winning screenplay for Milk and helped overturn California's anti-gay marriage Proposition 8, but as an LGBTQ+ activist he has unlikely origins. Raised in a military, Mormon household outside San Antonio, Texas, Black always found inspiration in his plucky, determined mother. Having contracted polio as a small girl, she endured leg braces and iron lungs, and was repeatedly told that she could never have children or live a normal life. Defying expectations, she raised Black and his two brothers, built a career, escaped two abusive husbands, and eventually moved the family to a new life in Northern California. While Black struggled to come to terms with his sexuality--something antithetical to his mother's religious views--she remained his source of strength and his guiding light. Later, she would stand by his side when he helped bring the historic gay marriage case to the U.S. Supreme Court.Mama's Boy is a stirring celebration of the connections between mother and son, Red states and Blue, and the spirit of optimism and perseverance that can create positive change in the world.

Dustin Lance Black's Mama's Boy: A Story from Our Americas is an absolutely superb memoir.

To say that Lance's mom was a bad ass superhero is an understatement. Her life, strength, and determination were all remarkable. I am in awe of her! Lance wonderfully demonstrates his mother's courage and strength, while also digging into the flaws of the Mormon church.

As a former Mormon, Lance of course delves into his experiences with the church. This part is so damn tough to read at times. As many gay ex-Mormons have said, the Mormon church suffocates it's LGBT youth. It's devastating to read yet another example of the pain and suffering a kid had to endure in the name of religion. My heart breaks for young Lance, who at the age of 6, knew his growing feelings for boys were wrong.

Lance holds no bars with his retelling of the abuse he and his family endured. And I was shocked to learn about the Mormon church's issues with law enforcement. It is abhorrent, and morally vile. I already felt so much hate for the Mormon church, but this definitely added to my anger.

As I've sensed from following Lance and his speeches, family is definitely everything for him, when he was young and now as a husband and father. This book expertly explores his connection with his family.

What makes this story so special is the fact that Lance's life is full of interesting experiences, both good and bad. But what makes it accomplished is the manner in which he develops this book. A natural storyteller, he finds the perfect pace, the perfect words, and the perfect flow for telling his life story.

Lance's past is full of physical pain, and a whole lot of self hatred. There are many tough moments, suicidal thoughts, and just trying to survive life when he thought himself to be a demon.

If you are a fan of Lance and have followed his speeches, some are things you will already know. But there are plenty of other things that are new to his most steadfast of fans.

A couple of special things I take away from this book are personal to Lance and his mom. The cover photo represents an important moment in their lives and relationship. And, to learn that both mother and son fell in love with a much younger man just seems so special to me.

Mama's Boy: A Story from Our Americas is a beautiful, touching memoir. It's a tale of abuse, fear, and danger. However, at it's heart it's a story of courage and strength, full of hope and love. I highly recommend this book to everyone!