Make Me Give In (Omega Celibacy Club #1) by Angel Knots 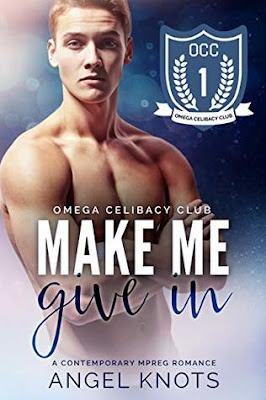 Welcome to the Omega Celibacy Club. No sex until graduation. No unexpected pregnancies. No alphas needed. SIMON Even if it’s not politically correct to say so anymore, everyone still knows that alphas and omegas are ruled by their biology. Sure, it’s the twenty-first century now and most people have given up believing in archaic ideas like fated mates, but just take a look at college drop out rates and you’ll see that some things haven’t changed at all. Alphas still dominate, omegas still submit, and horny college kids in heat let their hormones dictate poor choices every day. Not me and my roommates, though. Not if I have anything to say about it. Too many of our classmates here at Preston College have gotten knocked up and then dropped out. Given up their goals and dreams just because they’ve met an alpha with a big… ego. The point here is that there’s only one surefire way to avoid that trap, and that’s why I started the Omega Celibacy Club. No sex until graduation. No unexpected pregnancies. No alphas needed. And no, I’m not just saying that because I’ve been hung up on one particular alpha for approximately ever. I’m totally over Hunter King. I mean, not that there was ever anything to get over. Our families have been friends forever and he dated my sister back when I was still just a kid, but even if me and my right hand may have pined for him once upon a time, I barely ever think of him anymore. I mean never. I never think of him anymore. Did I mention I’m over it? HUNTER Weddings are a great place to get laid, but when I show up for my ex’s big day, I’m hoping to get a lot more than that. I’ve never admitted it, but the reason I broke up with her all those years ago was because of her brother. One look at little Simon Lawson and I was a goner. Of course I didn’t say anything though, not back then. I didn’t touch him. Always kept my distance. I had to, because he was just a kid… but he’s all grown up now. I’ve bided my time for years, but now I’m ready to see if the feeling is mutual. And if it is, I know exactly what I want. I want Simon. I want a family. And I want it forever. And even though I’ve never been the kind of alpha who imposes his will on omegas, when I finally realize just what it is that my omega needs, I know I’ll do anything at all to make that forever happen. In fact, I’ll do everything. MAKE ME GIVE IN is the first book in the Omega Celibacy Club series, a contemporary omegaverse world where the only thing stronger than an alpha’s will is his desire to keep his omega happy, and where even omegas who don’t believe in fated mates sometimes still find them.

Angel Knots' Make Me Give In is a fantastic mpreg romance.

I love Simon's complete turnaround. From a man who fears getting pregnant, everything changes when he meets Hunter. I love this story. Simon and Hunter are absolutely perfect together. And damn, the sex is hot!

This story is full of humor, and is delightful in it's delivery. The storyline is great, with a wonderful development, and a good pace. It might not be the most accomplished book ever, but I enjoyed every minute of it.

As for the Omega Celibacy Club, it's enjoyable and entertaining. I love the concept, and an excited to read about the rest of the members finding love.

If you enjoy fated mates, be sure to read Make Me Give In. It's a perfectly delicious low-angst and steamy mpreg.