Healing from the Shame of Religion, Rape, Conversion Therapy & Cancer

The first paragraph of Kerry Ashton's new memoir explains a lot: “I told this story once as fiction in the 1980s, but this time I tell the truth. I even tell the truth, in #MeToo fashion, about being violently raped by another man when I was 18, with a knife held to my throat—a secret I kept from everyone, including myself, for over 40 years. The rape, like other experiences I endured while a student at Brigham Young University, where I came out in the early 1970s, had a profound impact on my later life. But this story is not so much about my rape or my coming of age at BYU, as it is about the lifelong effects of shame itself, not only about how I internalized and inherited a wounding shame from my Mormon upbringing, but also how I eventually unshamed myself. It is about the journey of a lifetime, finding spiritual growth, self-discovery and healing along the way, while encountering many miraculous events that pushed me forward through darkness toward the light.”

Telling about his experiences during his four years at BYU—the rape, falling in love for the first time, police surveillance, harassment and arrest, while enduring three years of conversion therapy and electric shock treatments—provide the structure of Kerry’s memoir. But intermittently, the author shares memories from his childhood, growing up Mormon in Pocatello, Idaho, and later from his adulthood, as well as from his professional career as an actor and writer, both in L.A. and NYC, describing encounters with Barbra Streisand, Elizabeth Taylor, Bette Davis and Julie Harris, while detailing his experiences with Tennessee Williams and his brief affair with Stephen Sondheim. Lastly, he talks about the 12 years he spent in therapy, about his 16-year battle with cancer, how he eventually rid himself of the shame internalized from his Mormon youth, sharing glimpses into his sexual journey from his innocent youth through S&M and the gay leather scene in mid-life to the loving monogamous relationship he now enjoys.

I have to admit I was weary of reading Saint Unshamed just because it is a memoir. But, wow. Just wow. I am elated to have discovered this amazing and heartfelt story by Kerry Ashton.

The author holds nothing back in retelling his life. His account his raw, real, and gritty, and will have the reader feeling all the emotions along with the author.


I found myself saddened and angry that anyone has to be brought up in a church where homosexuality is viewed as an extreme sin. If you want to understand the harm the Mormon church has done to it's homosexual children, read this. I am hurting for all those former Mormons who are now openly gay, as well as any lgbt child currently being raised as Mormon.

Kerry's life story consists of vivid retelling of rape, learning about sex, and conversion therapy. The rape scene is graphic, rough and downright horrific to read, and even worse are the lifelong consequences of this assault. A victim of conversion therapy, those scenes are gut-wrenching and will have the reader devastated on Kerry's behalf.

An absolute must read for anyone looking to understand more about the Mormon church's feelings on homosexuality. A retelling of growth, healing, and acceptance, it's honest, painful, and haunting.

This book centers around the realistic opinion that organized religion is something where views and thoughts are forced upon people, instead of allowing one to make their own opinions. To know this story is true, not just to Kerry, but to many gay Mormon men, is devastating. Absolutely horrid and vile. My heart hurts for all of these men.


Kerry's writing is fantastic and heartfelt, with a non-stop pace and a vivid recounting of his upbringing. My only complaint is that the author jumps around with the time line throughout. Other than that, the writing is perfect, as it's written with depth and precision.

Sometimes you just find a story that you feel for weeks afterwards. Saint Unshamed is one of those stories. Kerry Ashton's life story if full of homophobia, shame, and family issues, along with fear and despair. It is an excellent memoir that I'd recommend to anyone.

The Holy War, as I have come to think of it, began on a hot day in early September 1971, the day I left Pocatello to drive four hours south to Provo, Utah, to attend Brigham Young University. As in all wars, whether holy or unholy, it would not be without its casualties.

I spent the morning packing things in my ‘56 Chevrolet, parked in the spot on the lawn where our driveway would have been had my parents ever had the money to pave it. A yellow-and-bronze, two- door coupe with cream interior, a huge cream steering wheel, and black dashboard, the car had class, which is why I named it Oscar— after the Academy Awards I hoped to win one day.

As I packed Oscar full of boxes, Dad worked under the hood of the car. Once Oscar was filled with boxes, I sank down on our front lawn. Knowing this would be my last day at home, I tried to capture everything I saw and felt around me: The red of Mom's roses framing our side porch, the hazy blue of the late morning sky, the large pine tree at the front of our corner lot, and the blue-grey crag of Scout Mountain in the distance, where I had always imagined Santa’s sleigh flew over on Christmas Eve.

Hearing Mom humming in the kitchen as she prepared lunch, everything seemed right in my Latter-Day-Saint world.

Getting up from the grass, I walked over to where Dad was still working under Oscar’s hood. “Everything look okay, Dad?” I asked.

“Oh, sure,” Dad replied in his folksy way. “I just wanted to make sure everything’s good with your car. I don’t want you stranded on the highway.”

Though I had fulfilled every church obligation, I was not the mechanic that Dad had hoped each of his three sons would become. I left mechanical jobs to Dad or to my two older brothers, both married by then.

“I love you, Dad,” I said suddenly. He stopped tinkering with the spark plugs and looked up at me. “I love you, too, son,” he replied, embracing me with a greasy hug.

Mom came out on the side porch just then. Wiping her hands on her apron, she called out to us, “Okay, you two! Lunch is ready!”

“Kerry Lynn,” she whispered, stroking my dark brown hair as she often did, “I don't know what I'm going to do without you.”

Now a grown-up, or so I thought, I bristled at her calling me by both my given names as it sounded so girlish. But since it was my last day at home, I chose to ignore it.

“With all the kids married,” Mom continued, “and you going off to college, this house is going to feel awfully empty without you.”

“Maybe you and Dad will finally get some peace and quiet,” I kidded. “Maybe now you two can finally go on that second honeymoon you’ve talked about.”

“Maybe,” she said, laughing as she reached out to hold me. “I

love you, Kerry.” As she held me tight, I never wanted to let go. Once Dad joined us at the table, he said a blessing on the food, as we always did in our home.

After the blessing, we tore through the food. Mom had made some of my favorites: Her wonderful potato and egg salad, savory burgers with all the trimmings, and delicious corn-on-the-cob bought fresh from the farmer’s market.

After lunch, we went into the living room where Dad anointed my head with oil, laid his hands upon my head, and gave me a sacred Father's Blessing—the blessing of a Melchizedek Priesthood Elder— warning me to be “mindful of the Adversary.”

Before I left that day, Dad took a photograph of me standing in front of Oscar. Barely 18 and dressed neatly, at 6’3” and 190 pounds, I was the very image of a conservative, clean-cut, LDS young man who loved his Mormon family, the LDS Church, and his Heavenly Father.

I arrived at Salt Lake City three hours later. From there, it took me another hour driving south on Interstate 15 before I arrived in the city of Provo.

Taking my first glimpse that day of Provo through Oscar’s wide windshield, I could see the white LDS Temple huddled against the Wasatch Mountains, its golden steeple gleaming in the late afternoon sun. Further north, Mount Timpanogos reached heavenward, while a sign at the main entrance to the BYU campus read: “The World Is Our Campus.” In reality, the campus became my world.

Driving north past the immense Cougar Stadium, and then into the foothills just beyond the BYU campus, then turning east and heading toward the mountains, I came to the huge Marriott Sports Arena under construction on my right, and stopped at the light. Once the light turned green, I made a left turn onto Sumac Avenue, climbing dramatically into the foothills, before pulling into the driveway in front of my new off-campus apartment.

Raised in Pocatello, Idaho as a Mormon in the heart of Mormon Zion, Kerry attended BYU in the early 70s, where some of the most dramatic events recounted in his memoir took place.

Always interested in pursuing a career as both an actor and writer, Kerry wrote his first play, BUFFALO HEAD NICKELSat the age of 17, and published it at 18. Since then, he has published several works, among them most prominently THE WILDE SPIRIT, a one-man play with music, in which Ashton starred as Oscar Wilde, and also wrote the play’s book, music and lyrics. The play won Kerry critical acclaim for both his writing and performance, and three 1977 L.A. Civic Star Awards for Best Actor, Play and Direction. The play ran for three consecutive seasons in Provincetown, MA from 1990-1992, and was produced Off-Broadway in 1996, winning Kerry a National Award of Merit from ASCAP. The author now makes his home with his partner Victor Ramirez in South Florida. For more info, visit www.KerryAshton.com.

one of two eBooks of SAINT UNSHAMED 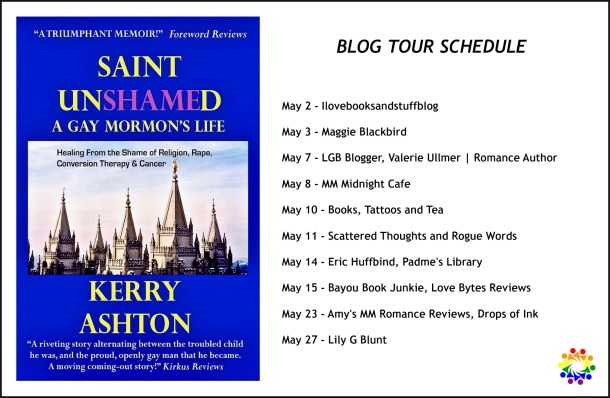