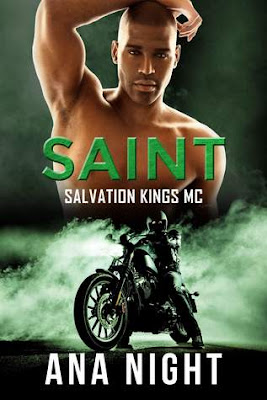 Nash Holland is a paramedic who lives for helping people. He’s never once been on the wrong side of the law. When he gets a call to a motorcycle club, he’s apprehensive, but then he meets a biker that makes his knees go weak. He never expected to find love in an outlaw biker, but he can’t deny the way Zayne makes him feel. Dating a biker with Nash’s profession isn’t a great idea but he’s been playing it safe all his life and maybe Zayne is just the right kind of danger for him.Zayne ‘Saint’ Lewis isn’t your average biker; he’s the road captain of the Salvation Kings MC and he’s not afraid to do what’s necessary to protect his club. He’s a one-percenter but he’s dedicated his life to helping people in need. He’s hesitant to bring Nash into his club life, unsure if Nash will be able to handle it. One thing he’s sure of, though, is the way Nash makes him feel.Will the secrets and dangers of Zayne’s life jeopardize their relationship? With a war brewing between his and a rival club, can Zayne keep Nash safe?

I didn't know what to expect upon starting Saint, the first book in Ana Night's Salvation Kings series. What I found was an amazing book that immediately sucked me in and was a pure delight.

Emotional and inspirational, there are many moments that tugged at my heartstrings. This is a wonderful reminder that not all stereotypes hold up to be true. The Salvation Kings are around to actually help people. Yes, they may have to do some bad things, but it's always for the better good.

An interesting conflict arises when Saint falls for Nash, a paramedic. Not only does Saint struggle with bringing Nash around the club, but Nash struggles with Saint being a part of the club. As a paramedic, his role is to help people, never to hurt them.

Saint's an absolutely riveting book. This is my first time reading an Ana Night book, and I am thrilled. I can't wait to read the next book.