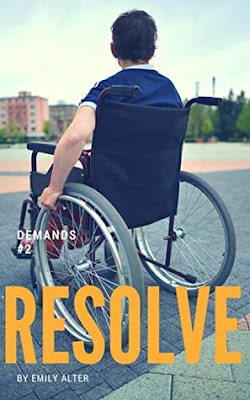 For a relationship to work, it is not just love which is demanded. Resolve is, too. Cole has his senior year of college and a photography business to worry about, so he could really do without the multiple sessions with physiotherapists his parents force him to go to. It leaves little room to consider romance as a choice for him. Pool instructor and avid swimmer Justin has always been his twin’s shadow. Where Aaron goes, he follows. He may not have much of a social life outside of his twin, but he loves his job and all the extra swim time he gets. He doesn’t think that he’s lacking anything. Then Justin’s booked for a photo shoot with Cole. Being together, as right as it feels, also means they’ll have to come face to face with their belief systems. They must find the resolve to be their own person, or they could lose it all –themselves included. Resolve is the 2nd book of the Demands series. Although they can be read as stand-alones, characters from previous books will make multiple appearances throughout the series.


Emily Alter's Resolve is the second book in her Demands series.

Cole's a great character. At 21 he's growing his photography business, while trying to deal with the pressure from his parents. He's content with being in his wheelchair, if he could just get his parents to stop pressuring him to walk. His disability's well explored, with not only the pressures of therapy but also with discussions of the way people react to seeing him.again.

Cole meets Justin when he's hired to photograph the man and from the start Justin doesn't care about his wheelchair. It's refreshing and beautiful. One thing I love with these two is the way Justin didn't care about Cole being a paraplegic. Justin just liked the way for who he is, the way he is. As he gets to know him, he manages to change both their lives forever.

My heart broke for Justin when he discovered that Cole's closeted. Talk about shattered dreams. It's tough enough to find someone he loves, but to be closeted isn't what he wants.

Theirs is a tale of fear, family issues, sacrifices, and lost time. It's about gaining independence and accepting your fate. It's about taking chances and risking your heart.

Emily Alter's writing style is wonderful, as she always excites with emotional impacts to her writing. Her storylines are riveting and engaging. I'm thrilled to have discovered this newish author. In Resolve, she manages to pack a punch with some angst that just left me gutted. But in the end, the mental growth of each man is worth the long journey. I will definitely be re-reading this one at some point.