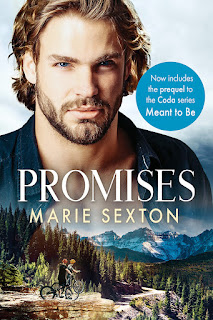 
Includes the Coda series prequel novella, Meant to Be

Jared has simple goals for his freshman year of college: make friends, lose his virginity, come out, and maybe fall in love. He doesn’t anticipate getting caught between his friend Bryan and Bryan’s flamboyant ex. Through the awkwardness, Jared learns love doesn’t always mean sex and the most meaningful connections might have nothing to do with romance.
*****
Can a man who loves his small hometown trust it to love him back?
Jared Thomas has lived in the mountain town of Coda, Colorado, his whole life. He can’t imagine living anywhere else. But Jared’s opportunities are limited—the only other gay man in town is twice his age, and although Jared originally planned to be a teacher, the backlash that might accompany the gig keeps him working at his family’s store instead.
Then Matt Richards moves to town.
Matt may not be into guys, but he doesn’t care that Jared is. A summer camping and mountain biking together cements their friendship, but when Matt realizes he’s attracted to Jared, he panics and withdraws, leaving Jared all too aware of what he’s missing.
Facing Matt’s affair with a local woman, his disapproving family, and harassment from Matt’s coworkers, Jared fears they’ll never find a way to be together. But for the first time, he has the courage to try… if he can only convince Matt.


I first read Marie Sexton's Coda Series years ago, and loved it! Thus, I found myself super excited to read the re-release of the first book, Promises.

This coming out story is a wonderful feel-good romance. It starts with Jared befriending Matt, the new guy in town. I love the strength of their bond, as their friendship is instant and so perfectly natural. Soon they're spending all their time together. Of course Jared's crushing on Matt, but he knows Matt's straight.

It's a beautiful story of falling in love with your best friend. It's a tender story of suddenly trusting these new feelings your having. I love these two men; everything about them. I love Jared and Matt as a couple. They are just perfect together, with a strong friendship as their base, and a steamy chemistry once they give into their feelings.

Matt's confusion stems from his father's extreme homophobia, which is a tough read. Understanding his background, one certainly can't fault Matt for his behavior.

Overall, Marie Sexton delights in this wonderful tale of taking chances and leaving the comfort of what you know. And the ending of Promises is perfect!

I loved this book when I read it years ago, as it was first published in 2010, and this edition includes a great prequel, Meant To Be, which explores Jared's college years. It's a great tale of the struggle of first love and the changes that happen over time. It explores that sometimes a relationship is meant to be for a while, but not forever. And sometimes you can love each other but aren't able to be a couple. I loved it.