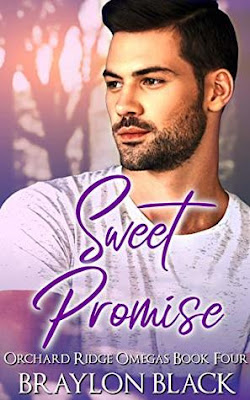 The relationship’s only for the sake of the baby. That’s what they keep telling themselves... An omega chasing love with rose-colored glasses— Dangerous crime rarely happens in Orchard Ridge, but deputy sheriff Finn Johnson struggles to move on from one of the few times it did. On top of his anxiety from a near-death experience, Finn’s latest breakup has made him doubt he’s any better at settling down than he is at protecting his hometown. Reading romance novels over lunch breaks probably hasn’t helped to ground his expectations, either. That’s why it’s ironic that his next speeding ticket recipient is none other than Vaughn, his childhood friend with whom he made a pact to have kids once they hit thirty. One drunken decision leads to another, and when Finn gets pregnant, suddenly their half-serious rom-com pact becomes The Plan. But Finn wants more from Vaughn than just a roommate and a kid together. Can he bet his heart—and their future child—on a marriage of convenience when he wants the fairy tale ending? An alpha with impossibly high standards— By almost any standard, Vaughn Palmer was headed for success in college. However, his fierce competitive streak with his twin brother has only highlighted his failures in his own mind. Falling short has become a self-fulfilling prophecy, and he’s frustrated that his business ventures, and his love life, haven’t been more successful. A chance encounter with long-lost pal Finn leads to a passionate one night stand and life-changing consequences. With a baby on the way, Vaughn agrees to give the whole “marriage of convenience thing” a try… until it’s not enough to satisfy either of them. Can they really stay together as friends with benefits when both of them want something more? Sweet Promise is a standalone, non-shifter mpreg romance and the fourth book in the Orchard Ridge Omegas series.


Vaughn returns home when he discovers his fiancé's been cheating on him.
Reuniting after years apart, these former best friends suddenly feel some intense attraction. And, after making a promise to have a friends marriage if they're both 30 and single, here they are, 30 and single.

It's downright adorable with all the sweet feels of a good friends to lovers romance. The deep connection they have has friends, with a long background, makes their relationship strong.

As well, we get all the fun of an omega pregnancy.

The writing is fast paced, leaving me entertained throughout. Both men are well written. They're likeable, and realistic with their fears and doubts.


The family dynamics of Vaughn's family gutted me. His twin is a complete ass and his father expects way too much from him. I seriously can't get over his brother's behavior.

Sweet Promise is a beautiful tale of destiny and putting the past behind you and embracing your future.