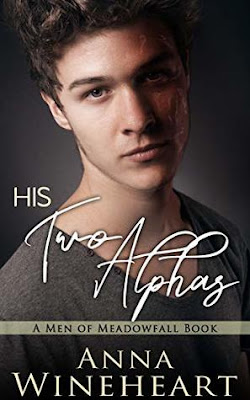 For twenty years, single-dad Micah Davis has dreamed of the perfect wedding. The perfect alpha. Then the Fire tears apart Micah's body, leaving him crippled and scarred. His confidence wrecked, his chances of finding a bondmate sub-zero, Micah has little left... Except a secret: The nineteen-year-old in his college classes, Spike? Micah's son's close friend? Spike makes Micah feel desirable again. Like Micah might just be the most important person in the world. Spike keeps his secrets close: He's in love with his professor. Has been for nine years. He's been homeless. He's secretly a sap. Then there's his alpha stepbrother, Kai, and Spike shouldn't love him, too, but he does. Except Micah's too good for Spike, and Kai has sworn to leave Meadowfall. Sooner or later, they'll both break Spike's heart. Kai has a dream: To play major-league basketball. To become stronger, richer. So he can never be hurt again. That means leaving his hometown, and it means leaving Spike behind. But Kai won't rest easy until Spike settles down with a bondmate... And if it's the professor Spike wants, it's the professor Spike gets. Kai will do anything for his stepbrother. What Kai doesn't expect... is for his own heart to be tangled in the process. His Two Alphas is a MMM, A/A/O non-shifter, standalone MPreg romance. HEA guaranteed.

Anna Wineheart's His Two Alphas is the eighth book in the Men of Meadowfall series. And, damn, it's a steamy one.

Spike and Kai are two alpha stepbrothers who happen to have a thing for their friend's father, Micah. Spike and Kai's relationship is heartbreaking and yet heartwarming in the end. They've physically been together a lot, which, of course, is taboo, but the emotions were never able to complete their bond. Adding Micah to the mix brings their emotions to an all time high. The scenes between them, and the lack of a mark between them, is as emotional as it gets.

Then we get to add in Micah. Did I mention Micah's also their professor? The forbidden aspect of their relationship is exciting and riveting. Together, they are Hot, Hot, Hot! Seriously, the heat jumps off the pages.

Their relationship consists of fears, insecurities, and hesitation. Micah's scarred from a fire, and the scenes were the alphas talk to him about his scars are so damn tender and beautiful.

The writing's fantastic, keeping me invested throughout. It' so exciting to finally get Micah's story and to see him find love.


His Two Alphas is absolutely riveting. I love every single second of this menage romance. This scorching hot double forbidden romance is a wonderful treat that highly delivers all the feels!